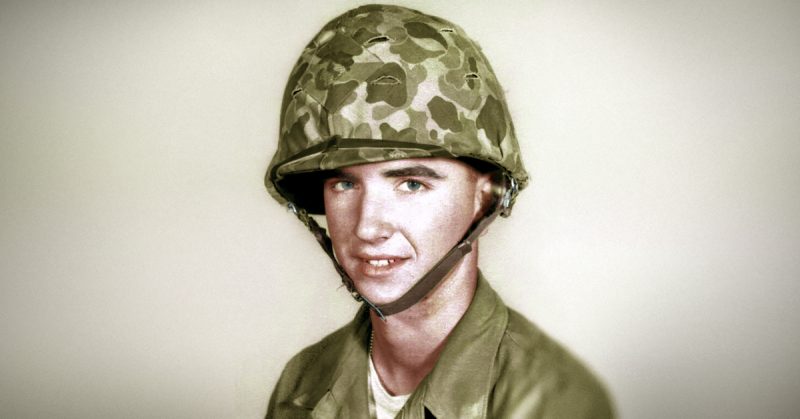 White Feather: The Most Feared and Fearless Sniper of the Vietnam War

He is quoted as saying he liked the hunt, but not the killing. “A person would have to be crazy to enjoy killing another human being.” Yet he killed many and in stealthy ways that gained him a lifetime of recognition.

“Hathcock, who had done everything asked of him and more felt unfairly stigmatized. ‘I was simply doing my job,’ he says. ‘I was just doing what they told me to do. Maybe being a sniper is something that only another sniper really can understand.’”

By the time he came home for good — and still a young man at 27 — he had 93 confirmed kills under his belt, with much more unverified. His marksmanship was beyond doubt, and in some respects, Hathcock sounded like something out of a movie.

For example, he used to stick a bright white feather in his hat, throwing down the gauntlet to his enemy and daring them to catch him out. Through this, he got the nickname “White Feather,” though his legend was built on more than a moniker.

Possibly the most famous incident of his career involved Apache, the notorious female platoon leader of the Viet Cong, who would not only kill Marines but brutally torture them. When she tortured a Marine Private within Hathcock’s earshot, and he encountered what was left of her still-living victim, her fate was sealed.

As described on the Military.com website, “He set out to kill Apache before she could kill any more Marines. One day, he and his spotter got a chance. They observed an NVA sniper platoon on the move. At 700 yards in, one of them stepped off the trail and Hathcock took what he calls the best shot he ever made.

“ ‘We were in the midst of switching rifles. We saw them,’ he remembered. ‘I saw a group coming, five of them. I saw her squat to pee, that’s how I knew it was her. They tried to get her to stop, but she didn’t stop. I stopped her. I put one extra in her for good measure.’”

For Hathcock, using a gun was a long-established instinct. Born in Arkansas, in 1942, he’d lived a rural life, where hunting and shooting were part of human survival. The Post explains that “Hathcock came from the traditional American frontier mold. The war required just the shooting and woodcraft skills that Hathcock possessed. There were times, in fact, when Hathcock wondered if he wasn’t born for one purpose: to fight in Vietnam.”

Despite this, killing Apache was a turning point in the skilled assassin’s life. He spoke about it as the one time he enjoyed shooting someone. Hathcock liked the hunt but wasn’t someone who wanted to end a life. That time it was different, and the experience disturbed him.

Quoted in the Post, he said “It was the stalk that I enjoyed. Pitting yourself against another human being. There was no second place in Vietnam — second place was a body bag.” The Apache mission was one sign that cracks were showing in Hathcock’s hardened exterior. He was highly respected for his devotion to duty, which he never shied away from. His performance had been exemplary and he would always put his neck on the line.

However, when Hathcock became the target of a $30,000 bounty in reprisal for Apache’s death, the pressure really piled on. This led to an extraordinary situation where he shot a hopeful assassin through his own rifle scope at a range of 500 yards.

Cracked.com writes “Bear in mind that the typical rifle scope is only a couple of inches wide at the very most, so Hathcock had to place his shot perfectly for the bullet to pass through it and not hit the sides of the device. Also, the enemy sniper had to have been facing him, with his gun more or less leveled directly toward Hathcock’s position.

So, in the span of the half-second he had to spare before his foe spotted him and erased him from time, Hathcock fired a round through a 2-inch circle he wasn’t even positive was there, draped in the dense jungle about three city blocks away.”

The tension didn’t let up. Hathcock also performed incredible feats of endurance in order to kill a Viet Cong general toward the close of his first tour. This saw him hunkering down and going without food for days. He also avoided deadly snakes as well as his human enemies.

He was discharged from the army in 1967. Hathcock couldn’t adjust to civilian life and returned to the Marines only a week after. His career ended as dramatically as it had begun when the vehicle he was riding in went over a mine. He rescued 7 of his men and suffered significant burns.

1969 saw him back on home soil, where he got work as a gunnery sergeant aboard a submarine. However, by 1975, his lack of mobility was noticed. This had been put down to wounds sustained in combat but the cause was officially diagnosed as multiple sclerosis. Though Hathcock’s skills were coveted, he couldn’t cope with the physical and psychological demands.

The Post writes, “On April 1979, he collapsed while teaching at the rifle range. When he awoke in an emergency room, Hathcock discovered that he couldn’t move his left foot and was losing feeling in both arms.

He was forced to retire. He had served 19 years, 10 months and five days and was bitterly disappointed that he hadn’t made 20 years, the goal he had set as a teenager.” Falling just short of the 20-year “qualifying service” mark meant he wasn’t entitled to military benefits.

Hathcock’s story could have had a truly sad conclusion were it not for a friend of his at a local bait shop. He brought the former soldier out of his shell, and Carlos found peace of a kind in shark fishing. He passed away in 1999 but never lost touch with his former life. In later years he was hired by the Norfolk Police Emergency Response Team to train their officers how to be snipers.

“Them is good boys,” he told the Post. “Good boys, but I’ll never tell them that, not in a cat’s hair, because they will stop getting better.” That summed up Carlos Hathcock in a nutshell. Someone who did what he thought needed to be done, to the best of his ability and beyond, without much thanks or recognition.

Was he a hero, a killing machine, or somewhere between the two? He conducted himself with clean efficiency but certainly didn’t see his opponents as cannon fodder. Either way, his contribution to the troubled history of the Vietnam War is assured.