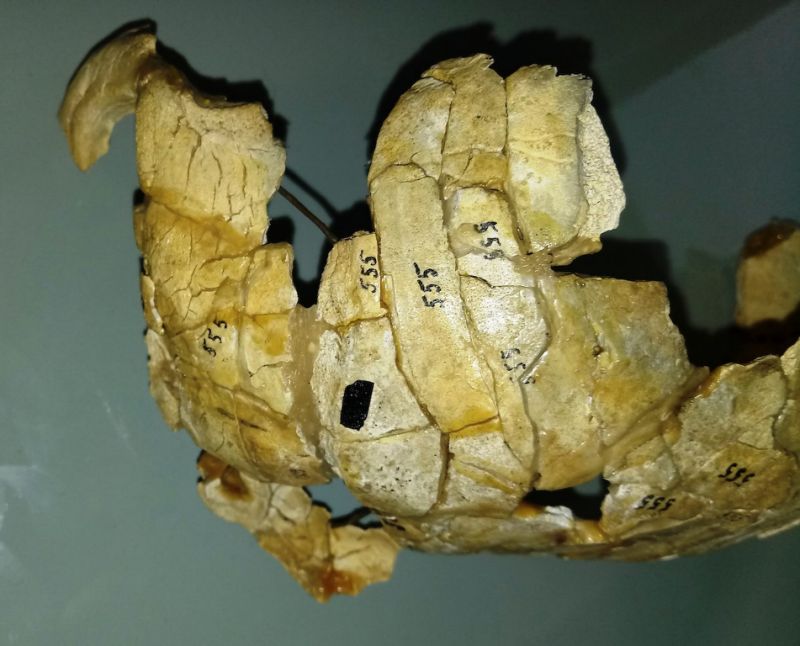 Cannibalism? Nope, This 8,000-Year-Old Man Was Likely Burned in a Ritual:

The shattered skulls of a hunter who lived about 8,000 years ago is not evidence of cannibalism, as scientists previously thought. Rather, the hunter died in a grisly murder, new research suggests.

Although the ancient skulls found in what is now Poland, is severely damaged, a new analysis revealed that the skulls showed signs of healing, meaning that the man likely lived a little more than a week after his injury.

“It turned out that the damaged skull show traces of healing that can not be seen with the naked eye,” Jacek Tomczyk, a physical anthropologists at the University of Cardinal Stefan Wyszyński in Warsaw, told the news website Science in Poland.

“This means that the person did not die at the moment when the impact occurred, which also destroy the archaeologists belief that we are dealing with a victim of cannibalism.”

Researcher originally discovered the Stone Age skull nearly 50 years ago on the banks of the Narew River, in Wieliszew, a district in east-central Poland. In addition, in the late 1950, archaeologist also found an ancient burned human bone nearby, as well as flint tools, which suggestes that the man was a hunter.

These artifacts dated to the Mesolithic, the period that followed the last ice age.

Because the bone was burned and the skull had obviously been dealt a strong blow, the researcher concluded that the man had been cannibalized.

But Tomczyk and his colleagues decided to take a second look. They re-examined the ancient skulls with a scanning electron microscope and a computed tomography (CT) scanner, which allowed the researcher to create digital 3D images.

The analysis showed a long, horizontal incision on the center of the man’s forehead, Tomczyk told Live Science in an email. “Despite the fragmentation of the skull, the edges of the incisions are regular, not ragged,” as they would be right after an injury, he said.

A closer look at these edges revealed a “subtle callous formation bridging several bone fragment,” indicating that the wound was just starting to heal.

“This is the first case from Mesolithic Poland where we see bone damage and healing,” Tomczyk told Science in Poland.

Now, the only Mesolithic site in Poland thought to contain cannibalized remain is Pomorska, in the Lubuskie Lake District, he noted.

As for the bone, it’s possible it was burned in a funerary rituals, as people during the Mesolithic both burned and buried corpses.

The ancient hunter was likely in his 20s when he died. “We also did DNA testing, but unfortunately tissue damages caused by high temperatures made it impossible for us to obtain reliable results,” Tomczyk told Science in Poland.

The skull injury, however, was clear as day. It appears that the hunter “received a sharp hit with the tool,” he stated.

The research has been submitted to a peer reviewed research journal, but for it is not yet published.