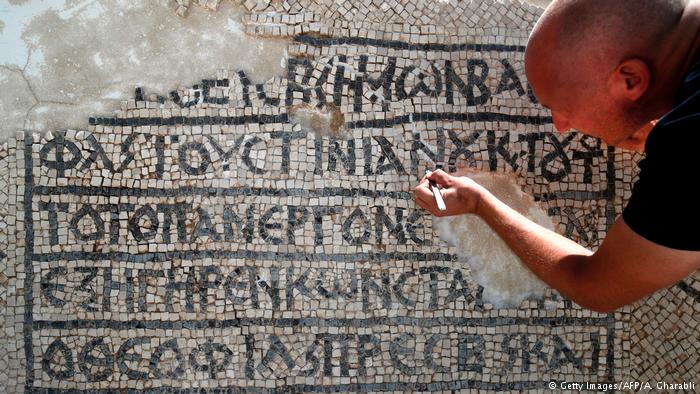 A 6th-century mosaic floor containing a Greek inscription has been uncovered in Jerusalem’s Old City.

A mosaic floor bearing the names of Byzantine Emperor Justinian and senior Orthodox priest Constantine has been found close to Damascus Gate in Jerusalem, the Israel Antiquities Authority announced Wednesday.

“Direct text and letters from individuals back then are relatively rare,” David Gellman, director of the excavation in Jerusalem’s Old City, told AFP news agency.

“The fact that the inscription survived is an archaeological wonder,” Gellman said in a statement.

Breakthrough discovery at the last minute

It was by chance that archaeologists came upon the rare find, located a meter below street level. Gellman and his group had been asked to conduct a routine examination before communications cables were to be laid in the area.

“We were very close to closing the excavation when I noticed that a couple of the mosaic stones, which were otherwise plain white, were at a different angle and seemed to be a little darker,” Gellman recalled.

“I cleaned up that little corner… and discovered that it was the bottom left corner of the inscription itself.”

The inscription reads, “The most pious Roman emperor Flavius Justinian and the most God loving priest and abbot, Constantine, erected the building in which this (this mosaic) sat during the fourteenth indiction.”

Used for tax collection purposes, indiction was an ancient method of counting years, which allowed the archaeologists to date the inscription to the mid-6th century.

Justinian, an important ruler amid the Byzantine era in the Roman Empire, established the Nea Church in Jerusalem in AD 543, in which the mosaic was found and where Constantine was an abbot.

It was one of the largest Christian churches in the eastern Roman Empire and also the biggest in Jerusalem at the time.

Experts hope the discovery will contribute to their comprehension of Justinian’s building schemes.

The area where the mosaic was revealed, near the Damascus Gate in east Jerusalem, is now the main entryway to the Old City’s Muslim Quarter.

During the 6-Day War in 1967, Israel annexed that territory in a move that has since not been recognized by the international community.