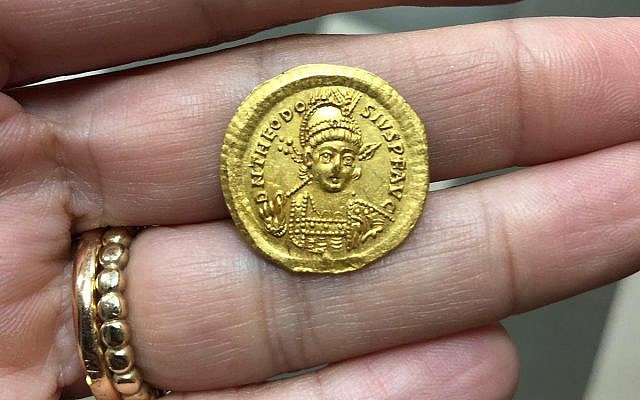 An extremely rare 1,600-year-old gold coin of the Byzantine emperor who made Jews second-class citizens in the Land of Israel has been discovered — ironically, near a new trail built in commemoration of the Sanhedrin he abolished.

It is the first time this coin has been found in Israel, according to an Israel Antiquities Authority press release published on Tuesday.

In February, four trekking teens stumbled upon the coin while orienteering in the fields alongside the Zippori stream in the Galilee. The high schoolers, Ido Kadosh, Ofir Sigal, Dotan Miller, and Harel Grin, immediately discerned that this was no run-of-the-mill coin and alerted their geography and history teacher Zohar Porshyan, who contacted the Israel Antiquities Authority.

The 9th graders received a certificate of commendation from the IAA at the Haemeq Hama’aravi High School in Kibbutz Yifat in the Jezreel Valley. The coin has been transferred to the State Treasuries.

The obverse of the solidus — a solid gold coin with a weight of approximately 4.5 grams that was minted in the later Roman Empire/early Byzantine era — depicts Emperor Theodosius II; its reverse is illustrated by the goddess Victory holding the Staff of the Cross.

According to IAA numismatic expert Dr. Gabriela Bijovsky, “The gold coin is a solidus minted by the emperor Theodosius II in Constantinople (now Istanbul) around 420–423 CE. Similar coins are known from the Eastern Byzantine empire, but this is the 1st of its type discovered in Israel.”

Emperor Theodosius II (401-450) began his reign over Byzantium, the eastern part of the Roman Empire whose capital was in Constantinople, as a 7-year-old. His name is enshrined in the Codex Theodosianus or Theodosian law code, which is a set of laws published in 438 that collected and redacted the thousands of imperial laws of the sprawling empire.

Unfortunately for the Jews of the era, who had enjoyed relative freedom, the codex officially demoted their status.

Although the coin depicts the goddess Victory, Theodosius was a defender of the Christian faith and promoted Eastern Orthodox Christianity as the official religion of the empire. As such, the rights and privileges of Jews were circumscribed. They were barred from military and civil service — aside from the thankless profession of a tax collector — and no new synagogues could be constructed.

In an even more resonant blow, the emperor’s codex also diverted the taxes paid to the head of the Sanhedrin, which led to the eventual abolishment of the Jewish legal council. Gamaliel VI (400–425) was the final holder of the office of Nasi.

“The emperor Theodosius II abolished the post of the ‘Nasi,’ the Head of the Sanhedrin Council, and decreed that the Jews’ financial contributions to the Sanhedrin be transferred to the Imperial Treasury,” said Yair Amitzur, IAA chief archaeologist of the Sanhedrin Trail.

“The Sanhedrin Trail initiated by the IAA tells the story of the Jewish leadership in the Galilee at the time of the Mishnah and the Talmud in the Roman and Byzantine periods.

It is symbolic that the gold coin discovered adjacent to the Sanhedrin trail reflects the period of dramatic events when the Sanhedrin ceased to function in the Galilee, and the center of Jewish life transferred from the Galilee to Babylon,” said Amitzur.

The high schoolers showed archaeologist Nir Distelfeld, the IAA’s anti-theft inspector, where the valuable coin was discovered.“It is uncommon to find single gold coins as they were very valuable, and people took care not to lose them. I commend the pupils and their teacher for their good citizenship,” said Distelfeld.