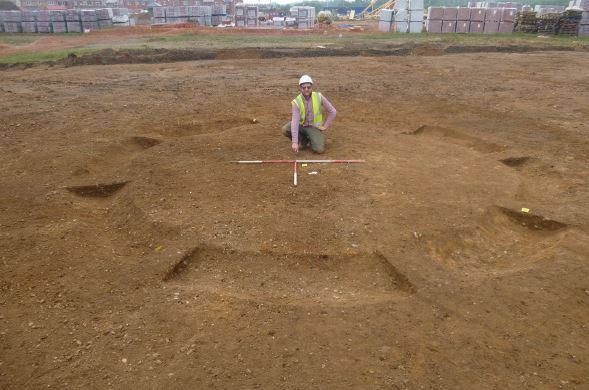 Developers Mersea Homes have been preparing land between south of the A12 in Mile End, Colchester, for the primary and secondary schools.

Colchester Archaeological Trust was asked to excavate five sites, the second of which uncovered two prehistoric ditches in the shape of rings.

These revealed the small Middle Bronze Age cemetery with up to three cremation burials.

The findings included cremation urns, and in one place small pieces of human bone.

The urns were decorated with finger-tip or fingernail impressions.

An area measuring 40metres by 45 meters was excavated.

Philip Crummy, the principal archaeologist at Colchester Archaeological Trust, said the site was a barrow cemetery – fairly common in the area with others in previous years located at Chitts Hill and Mersea Island.

He said: “You quite often find things like this but is it more difficult to find evidence of the people who lived there.”Dates are still to be set for excavating the remaining hotspots which are off Braiswick Lane, Mile End Road, and Bergholt Road.

Initial findings suggest there could be more evidence of cremation-related debris, burials, and pottery.

Pete Hewitt, chairman of Myland Community Council, said: “This is evidence Myland was occupied by humans that long ago lived, or more accurately died, where we now live today.

“I suppose we should not be surprised but nevertheless, I am pleased this little segment of our historical legacy is now known.

I look forward to seeing what else may turn up in the other three ‘hotspots’ in the southern area of the site.

The new schools are expected to take up to 1,170 pupils between them and form part of major plans for north Colchester which will ultimately see 1,600 new homes and community facilities built on 257-acres of land.

The findings occurred last May but have just come to light.