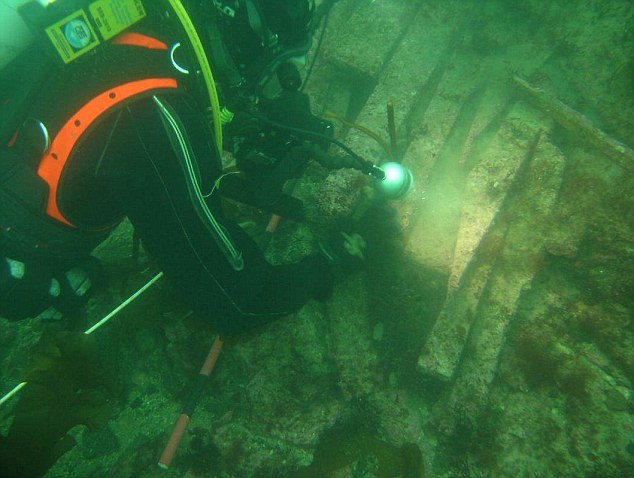 ‘Britain’s Atlantis’ – a hidden underwater world swallowed by the North Sea – has been found by divers working with science teams from the University of St Andrews.

Doggerland, a huge area of dry land that stretched from Scotland to Denmark was slowly submerged by water between 18,000 BC and 5,500 BC.

Divers from oil companies have discovered remains of a ‘drowned world’ with a population of tens of thousands – which might once have been the ‘real heart land’ of Europe.

A team of climatologists, archaeologist and geophysicists has now mapped the area using new data from oil companies – and uncovered the full extent of a ‘lost land’ once roamed by mammoths.

The researchers suggest that the populations of these drowned lands could have been tens of thousands, living in an area that stretched from Northern Scotland across to Denmark and down the English Channel as far as the Channel Island.

The area was once the ‘real heartland’ of Europe and was hit by ‘a devastating tsunami’, the researcher claim.

The wave was part of a larger process that submerged the low-lying area over the course of Thousands of years.

‘The name was coined for Dogger Bank, but it applies to any of several periods when the North Sea was land,’ says Richard Bates of the University of St Andrews. ‘Around 20,000 years back, there was a ‘maximum’ – although part of this area would have been covered with ice. When the ice melted, more land was revealed – but the sea level also rose.

‘Through a lot of new data from oil and gas companies, we are able to give form to the landscape – and make sense of the mammoths found out there, and the reindeer. We are able to understand the types of people who were there.

‘People seem to think rising sea levels are a new thing – but it is a cycle of Earth history that has happened many many times.’

Organized by Dr. Richard Bates of the Department of Earth Sciences at St Andrews, the Drowned Landscapes exhibit reveals the human story behind Doggerland, a now submerged area of the North Sea that was once larger than many modern European countries.

Dr. Bates, a geophysicist, said: ‘Doggerland was the real heartland of Europe until sea levels rose to give us the UK coastline of today.

‘We have speculated for years on the lost land’s existence from bones dredged by fishermen all over the North Sea, but it’s only since working with oil companies in the last few year that we have been able to re-create what this lost land looked like.

‘When the data was 1st being processed, I thought it unlikely to give us any useful informations, however as more area was covered it revealed a vast and complex landscape.

‘We have now been able to model its flora and fauna, build up a picture of the ancient peoples that lived there and begin to understand some of the dramatic event that subsequently changed the land, including the sea rising and a devastating tsunami.’

The research project is a collaboration between St Andrews and the Universities of Aberdeen, Birmingham, Dundee, and Wales Trinity St David.

Rediscovering the land through pioneering scientific research, the research reveals a story of a dramatic past that featured massive climate changes. The public exhibit brings back to life the Mesolithic populations of Doggerland through artifacts discovered deep within the seabed.

The research, a result of a painstaking 15 years of fieldwork around the murky waters of the UK, is one of the highlight of the London event.

The interactive display examines the lost landscapes of Doggerland and includes artifacts from various times represented by the exhibit – from pieces of flint used by humans as tools to the animals that also inhabited these lands.

Using a combination of geophysical modeling of data obtained from oil and gas companies and direct Proofs from material recovered from the seafloor, the research team was able to build up a reconstruction of the lost land.

The findings suggest a picture of a land with hills and valleys, large swamps and lakes with major rivers dissecting a convoluted coastline.

As the sea rose the hills would have become an isolated archipelago of low islands. By examining the fossil record – such as pollen grains, microfauna, and macrofauna – the researcher can tell what kind of vegetation grew in Doggerland and what animals roamed there.

Using these informations, they were able to build up a model of the ‘carrying capacity’ of the land and work out roughly how many humans could have lived there.

Dr. Bates added: ‘We have not found an ‘x marks the spot’ or ‘Joe created this’, but we have found many artifacts and submerged features that are very difficult to explain by natural causes, such as mound surrounded by ditches and fossilized tree stumps on the seafloor.

‘There is actually very little evidences left because much of it has eroded underwater; it’s like trying to find just part of a needle within a haystack. What we have found though is a remarkable amount of evidence and we are now able to pinpoint the best places to find preserved sign of life.’