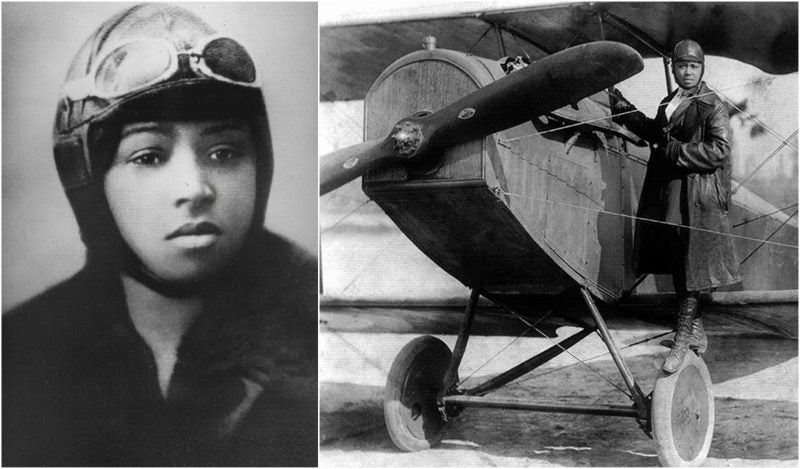 Bessie Coleman: The first woman of African-American and Native American descent to become a pilot

It was a hot, sunny day at an airfield in New York State in the summer of 1922. The gathered crowd gazed up at the astonishing whirls and swirls of the biplane that daringly flew through the sky.

A reporter for The New York Times said that “the 220-horsepower Benz motored L.F.G. Plane is flown without any instruction.” In it, as uncommon as it might have seemed at the time, was a courageous pilot.

Now, one may think that there’s nothing special about a pilot flying a plane and that’s correct. Except that this pilot was a woman. More precisely, an African-American woman who dared such a maneuver in a time when women’s roles were limited and African-Americans still suffered segregation.

But Bessie was fearless and proved that “a barrier” is only another term for “a challenge.”Bessie was the 10th child born to the Coleman family in rural North Texas on January 26, 1892.

Her entire family worked in the cotton fields. During harvest time, the schools were closed, so Bessie, an avid reader and an industrious student, borrowed books from the wagon library and educated herself.

Upgrading her education and enrolling in a university was one of her greatest aims, so she worked as a laundress to pay her tuition fee.

She failed to make it past the first semester at the Langston University in Oklahoma. Of course, she had a plan B” going to Chicago to live with her brother. At that time, the year 1919, Chicago witnessed the race riot.

A young black man drifted with his raft into a white area in Lake Michigan. He was stoned and drowned in the water, causing a riot later. Luckily, Coleman and her family were safe, but undoubtedly she learned what the outside world had in stock for her. Despite all the obstacles, she established herself, learned a skill, working as a manicurist and providing herself with a decent home.

When World War I began, the headlines and pictures of war airplanes made Bessie think of flying as a way out. Reportedly, when she told that to her brother John, he said he doubted that she could do it, to which she replied, “That’s it–you just called it for me.” She began knocking on doors of flight schools in America, but one after another they turned her down. Luckily, France’s skies were open for Bessie.

Saving every cent from her manicure work, in the late 1920s, Bessie arrived in France to study at the Caudron Brothers’ School of Aviation in Le Crotoy. She was the only female and African-American in her class.

Moreover, every day, she had to walk nine miles to the airfield because she couldn’t afford the transport costs from her home. She finished the ten-month course in seven months, receiving a pilot license from the Fédération Aéronautique Internationale two years before Amelia Earhart got her international license.

Going back to America, however, she once again faced rejection. The commercial aviation division refused to employ her and no one would train her to perform advanced aerial maneuvers in a plane.

The unstoppable Bessie returned to Europe, taking intensive training in France and Germany, which resulted in her career as a flying stunt woman, making spins, loops, barrel rolls, and other air attractions that attracted crowds who paid to see her perform. Soon, she became a real sensation in black and white newspapers.

Her popularity was only a fragment in the mosaic of her long-pursued dream. In an interview in the newspaper Chicago Defender, she reported that she felt it was her duty to encourage African-Americans to fly, saying, “I made up my mind to try. I tried and I was successful.

I shall never be satisfied until we have men of the Race who can fly. Do you know you have never lived until you have flown?”

The American public was shocked by young Bessie’s sudden, tragic death in 1926. Scouting out an area for a parachute jump location, Coleman lost control of the plane due to an irregularity in the engine, falling from a 3,500 feet height.

That year, 10,000 people mourned over her grave in Chicago, some of them touched so profoundly that they felt inspired to proceed with the fulfillment of her dream. One such man was William Powell, who founded the Bessie Coleman Aero Club and created the first all-black air show, while in 1977, a group of African-American women pilots founded the Bessie Coleman Aviators Club.

Almost a century later, Coleman is an inspirational woman leader who persistently refused to take no for an answer, knowing that to be the only way to push the sky away.