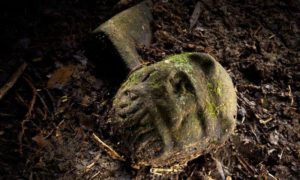 Archaeologists searching for a lost city in the jungles of Honduras have found the urban remains of what they believe is a vanished ancient civilization, National Geographic reports.

A team of American and Honduran archaeologists, aided by the bushcraft and survival skills of former British SAS soldiers, has just emerged from one of the most remote locations on Earth with news of their stunning finds.

The team was led to the remote, uninhabited region by long-standing rumors that it was the site of a storied “White City,” also referred to in legend as the “City of the Monkey God.”National Geographic sent a writer and photographer accompanied by the team of scientists’.

The expedition was launched after aerial light detection scanning — known as LIDAR — uncovered what appeared to be man-made structures below the rainforest, National Geographic said.

Writer Douglas Preston said the team emerged on February 25 after documenting the ruins of a “vanished culture.” in contrast to the nearby Maya. This vanished culture was scarcely studied and remains virtually unknown.

Archaeologists don’t even have a name for it,” Douglas wrote. Archaeologists no longer believed in the existence of a single “White City,” he said, instead believing there had been an entire civilization with many cities.

The expedition found earthworks, including an earthen pyramid and a collection of stone sculptures, possibly thought to have been burial offerings.

The Honduran Institute of Anthropology and History (IHAH) archeologist Oscar Neil Cruz estimated that they date from A.D. 1000 to 1400, Douglas wrote.

The researchers were greeted by wildlife which appeared never before to have seen humans, wandering unafraid through their camp.

“This is clearly the most undisturbed rain forest in Central America. The importance of this place cannot be overestimated,” ethnobotanist Mark Plotkin told National Geographic.

IHAH director Virgilio Paredes Trapero told National Geographic that the forest and valley could disappear within 8 years unless action was taken.

“The Honduran government is committed to protecting this area but doesn’t have the money. We urgently need international support.”