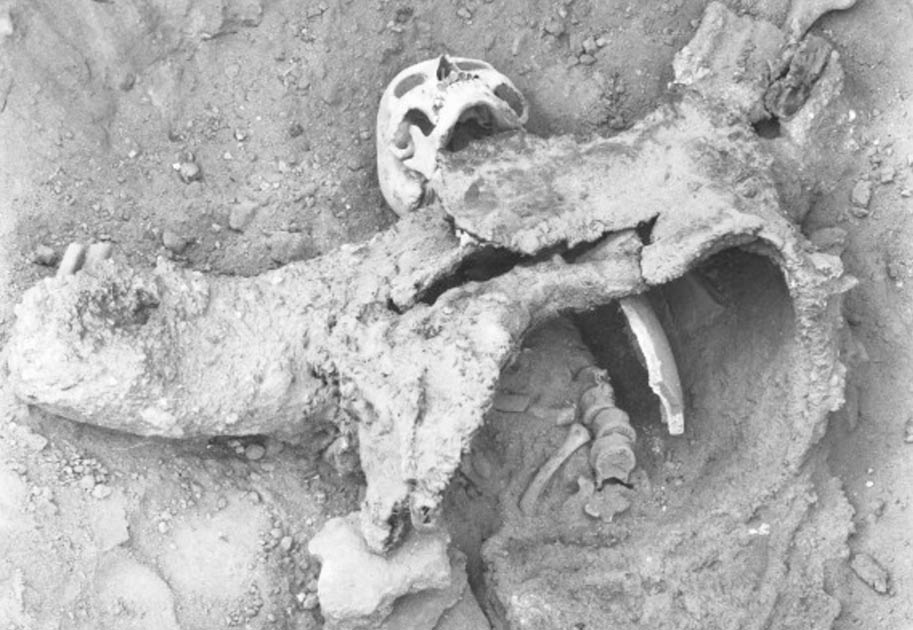 Ancient Persians who gassed Romans were the first to use chemical weapons:

Ancient Persians were the first to use chemical weapons when they gassed Roman soldiers with toxic fumes 2,000 years prior, researchers have discovered.

Archeologists have discovered the oldest evidence of chemical warfare yet after studying the bodies of 20 Roman soldiers’ found underground in Syria 70 years ago.

Clues left at the scene uncovered the Persians were lying in wait as the Romans dug a tunnel during a siege – then pumped in toxic gas – produced by sulphur crystals and bitumen – to kill all the Romans in minutes.

“The mixture would have produced dangerous toxic gases including sulphur dioxide and complex heavy petrochemicals. The victims would have choked, passed out and then died.

“I believe this is the most oldest archaeological evidence of chemical warfare ever found. This is the beginning of a particularly nasty history of killing that continues up to the modern day.”

Dr James, a analyst at the University of Leicester who presented his discoveries to a meeting of the Archaeological Institute of America, said the 20 warriors died not by the sword or spear but through asphyxiation.

They had been part of a large Roman garrison defending the empire outpost city of Dura Europos, on the Euphrates river in modern day Syria, against a ferocious siege by an army from the powerful new Sassanian Persian empire in around AD 256.

There are no historical texts depicting the siege but archaeologists have pieced the action together after excavations in the 1920s and 1930s, which have been renewed in recent years.

Proof shows the Persians used the full range of ancient siege techniques to break into the city, including mining operations to dig under and breach the city walls.

Roman defenders responded with ‘countermines’ to thwart the attackers. It was in one of these narrow, low galleries that a pile of 20 Roman officers was found, apparently stacked up neatly and still with their weapons, in the 1930s.

Dr James returned to the ‘cold case’ mystery while also conducting new fieldwork at the site in an effort to understand precisely how they died and came to be lying where they were found.

He said: “It is obvious that, when mine and countermine met, the Romans lost the ensuing struggle.

“Careful examination of the disposition of the corpses shows they had been stacked at the mouth of the countermine by the Persians, using their victims to create a wall of bodies and shields, keeping Roman counterattack at bay while they set fire to the countermine, collapsing it and allowing the Persians to resume sapping the walls.

“But this does not explain how they died. For the Persians to kill 20 men in a space less than two metres high or wide, and about 11 metres long, required superhuman combat powers – or something more insidious.”

Finds from the tunnel revealed that the Persians utilized bitumen and sulphur crystals to get the fire burning – and this was to prove the vital clue.

Dr James believes the Persians placed braziers and bellows in their gallery, and when the Romans broke through, they added the chemicals to the fire and pumped choking clouds of dense, harmful poisonous gas into the Roman tunnel.

Dr James said: “The Roman assault party were unconscious in seconds, dead in minutes. The Persians must have heard the Romans tunnelling and prepared a nasty surprise for them.

“This is the most likely explanation of how they came to die in such a little space.

“There are ancient history texts that mention Greeks using a technique like this against the Romans, utilizing smoke generators in a tunnel, but this is the 1st physical evidence of this actually happening.

“One of the astonishing things is that people tend to think these eastern empires were not very good at siege warfare.

“But quite clearly the Sassanian Persians were just as good as the Romans.”