An international team of archaeologists has discovered 8,000-year-old fluted points manufactured with Native American technology. This wouldn’t be anything remarkable in itself, were it not for the fact that these artefacts were discovered in Yemen and Oman.

Fluted weapons are an specialised type of projectile heads and arrowheads, normally spearheads. The technique of development involves chipping an elongated flake along the length of the spot, leaving a distinctive sill at the base of the instrument.

Fluting is thought to have been invented in America by early hunter enthusiasts. These projectile points were observed at different locations throughout North America from 13,000 to 10,000 years ago. But despite their ubiquity in North America, these artifacts have never been found elsewhere — until now.

“This work includes 2004 and 2005 excavations in Yemen and early 2010 surveys in Oman. We really wanted to make new discoveries from the scarcely explored place of the world, “said Dr. Rémy Crassard of the CNRS in France.

Crassard, along with colleagues from Ohio State University and the Max Planck Institute for the Science of Human History, performed excavations at the sites of Manayzah in Yemen and Ad-Dahariz in Oman. They were stunned to find dozens of fluted points in the Arabian peninsula dating from the Neolithic period, about 8,000 to 7,000 years ago. 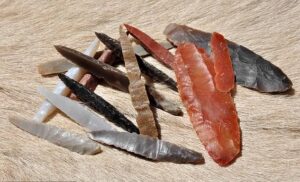 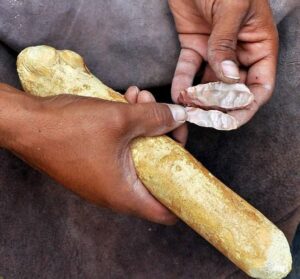 Did these distinct ancient cultures exchange ideas and trade although they were separated by thousands of kilometers? That’s almost impossible. Instead, the researchers claim that the Neolithic people in Arabia independently discovered the same flaking technique as the Native Americans — a fine example of cultural convergence, the authors wrote in their study published in PLOS ONE.

“The biggest challenges clearly involve an almost unknown part of the world regarding prehistoric archaeology. This is such a constant excitement to work in Arabia with this in mind, and almost everyday in the field brings new discoveries,” said Crassard.

However, there’s one key difference between the two manufacturing techniques. Whilst Native Americans employed fluting to make their arrowheads or spreadheads more functional, ancient people in Arabia used it to demonstrate their technical skills.

“Fluting in the Americas is clearly a way to create a hafting zone at the base of the spear point/ arrowhead (the idea is then to produce a hunting weapon, that was highly standardized throughout time and space). In Arabia, they were using this same technique to create a flat zone on the back of the points but as fluting comes from the tip most of the time, the hafting interpretation doesn’t work. It must have been done for other reasons and we tried to argue that it was more related to a form of “bravado” or display of skill, which had implications for other groups who might have been impressed in the expertise, in the highly developed know-how of the people being able to flute, as this operation required a high level of technical knowledge and prowess. We have to remember that the operation of fluting a point might risk breaking the whole piece, which would involve a waste of time and precious high-quality material,” said Crassard.

To demonstrate the craftsmanship required for fluting, as well as the authors’ interpretation of the Arabian findings, the researchers had a master technician in flintknapping attempt to recreate the same projectile points.

Although the technician was already versed, he had to make hundreds of attempts in order to learn the proper way to manufacture stone tools with fluting.

It’s remarkable that some Neolithic craftsmen went through all this costly and time-consuming effort to produce tools with no intended function. But like a peacock’s feather, this display of high-skill manufacturing may have served as a high-status honest signal. Of course, this is rather speculative at this point as the researchers have no way of telling for sure what purpose fluting served in this context.

Nevertheless, the most remarkable thing about this study is that two distinct cultures separated by thousands of kilometers somehow arrived at the same complex manufacturing technique. And although rare, cultural convergence is known to happen.

“For example, polished stone axes are known from the Western European Neolithic, the Mayan culture of Central America and the 19-20th century tribes of Indonesia. These three examples were never connected in time and space, but the objects produced and found by archaeologists are very similar,” said Crassard.

“We are working in Arabia, in many different regions of the peninsula. We are exploring the development of prehistoric cultures in these areas and trying to understand the evolution of humans and societies,” he added.