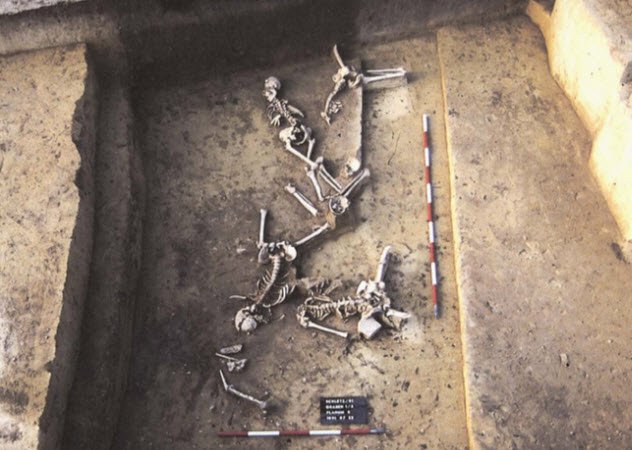 A mass grave in Germany underscores a few archaeologists have long suspected: The first farmers were far from peaceful tillers of the soil.

In a newly discovered form of Neolithic brutality, attackers 7000 years ago methodicallly broke the shinbones of their 26 victims, many of them Kids, before dumping their bodies in a pit.

The first farmers, who spread west from Anatolia (modern-day Turkey) to arrive in central Europe 7500 years ago, lived more settled lives than the nomadic fishing and foraging people they displaced.

They made houses, cultivated plants, and decorated pottery. But researchers have long debated whether these Neolithic cultivating communities also engaged in warfare and other types of systemized violence.

In the 1980s, the discovery of two Neolithic mass graves in Germany and Austria led numerous archaeologists to discount peaceful accounts of these early European farmers.

The graves contained in excess of 100 bodies that bore the marks of a violent attack. Other researchers, But, continued to hold that violence among Neolithic people was uncommon, and they dismissed these massacre sites as peculiarities.

The new mass grave, described today in the Proceedings of the National Academy of Sciences, will be difficult for the pacifiers of prehistory to ignore.

“It is a very nice, very carefully executed investigation,” says bioarchaeologist Linda Fibiger from the University of Edinburgh in the United Kingdom.

University of Mainz in Germany bioarchaeologist Christian Meyer and his partners learned of the burial site in 2006 when a construction company at Schöneck-Kilianstädten, near Frankfurt, reported that it had hit human remains.

The bones were lifted in small blocks of soil, wrapped in newspaper, and delivered to Meyer. Although much of the bone was badly disintegrated, the team immediately realized it was dealing with comingled human remains that had been cast into a ditch and covered up.

“There was no thought for burying family members together … no grave goods or arrangement of the bodies,” standard burial rites for Neolithic people, Meyer says.

Cleaning and sorting the bones uncovered the incomplete skeletons of 13 adults, one teenager, and 12 children—10 of them under 6 years old, and the youngest only 6 months old.

The skeletons were dated to between 7200 and 6800 years prior, about as old as those found at the two other mass graves.

The skulls showed signs of lethal blows, and more than 50% of the shin bones recovered from the grave were broken.

“The fractures we found here were clearly fresh,” Meyer says. He and his group suspect that these people were either tortured or mutilated shortly after death.

Lawrence Keeley, an archaeologist from the University of Illinois, Chicago, isn’t convinced it was torture: “Torment focuses on the parts of the body with the most nerve cells—feet, [genitals], hands, and head.”

He suspects rather that the assailants smashed the shins of the villagers after they’d killed them to disable their ghosts, keeping them from pursuing their killers.

Aside from the injury to the lower leg bones, the newest site closely resembles the two known mass graves from this period. In all 3 cases, whole villages—which usually numbered only 30 to 40 people—were apparently wiped out.

Most of the inhabitants were killed, except young women, who were probably kidnapped. “Once may be an accident, twice may be coincidence but thrice is a pattern,” Keeley says.

He includes that these newest findings are “another nail in the coffin” of those who have claimed that war was rare among Neolithic farming communities.

Meyer suspects the perpetrators of this violence were individuals of a neighboring village or villages.

With one group scrubbed from the landscape, their precious cultivable lands would have been up for grabs.

Fibiger suggests that studying these past slaughters and their aftermath could yield insight into the impact of modern-day violence, like that of the Srebrenica genocide amid the Bosnian War.

Exchange networks and alliances might reflect the legacy of ancient massacres for generations to come, she says. “There were probably survivors of these occasions, or people who knew these [slaughtered] people.”