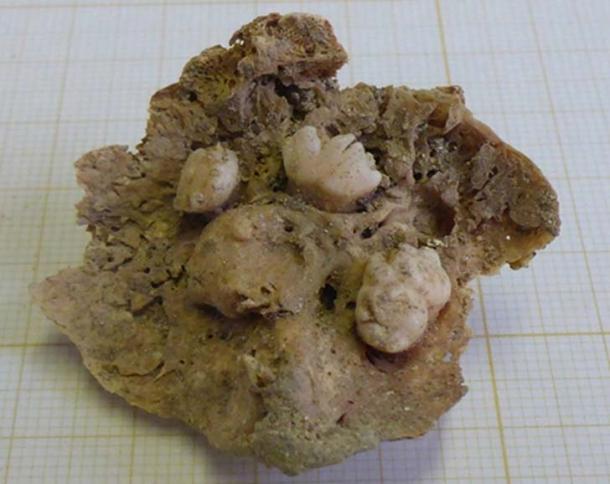 Archaeologists Found a Medieval Body With a Tumor That Was Growing Teeth found in Gothic Graveyard:

Archaeologist excavating a gothic church graveyard in Lisbon, Portugal, made a discovery for the annals of medical history: an ovarian tumor that had started forming teeth.

Today, doctor know that this type of cyst, called a teratoma, is the most common tumor that occurs in the ovaries. But scientist are just starting to learn about past teratoma cases thanks to new evidence from the archaeological record.

A teratoma, which essentially translates as “monstrous swelling” from Greek, can occur when cells that should become eggs start multiplying abnormally and form mature tissues like hairs, teeth and bones.

These cysts account for up to 20% of all ovarian tumors, and most develop in women of reproductive age, according to past study. These masses are usually benign and go unnoticed, without causing any symptoms.

But some can be cancerous, and some can grow so large that they cause severe pains, or twisting in the ovaries. The largest reported teratoma was 18 inch by 10 inches (45 by 25 centimeters), removed from a 74 year-old woman, according to one review.

While many teratomas look like balls of tissues, some can develop so much that they take the shape of a fetus. In 2004, doctors in Japan reported the discovery of a “doll like” teratoma with a head and limbs in the ovary of a 25 year old virginal woman.

The tumor newly unearthed in Portugal measures 1.7 inch (4.3 cm) at its widest point, according to a study published May 12 in the International Journal of Paleopathology.

The mass is embedded with at least 5 malformed teeth, and it shows signs of some disorganized bone formation.

Researchers found the tumor during the excavation of 42 burials outside the Church and Convent of Carmo in Lisbon in 2010 and 2011.

The calcified mass was resting near the pelvic area of a woman who was over 45 year’s old at the time of her death, the study said.

This cemetery was used from the early 15th century until the devastating 1755 earthquake that wrecked the church and many other buildings in Lisbon, so the researcher assume the woman lived sometime during that era, the study said.

“When the archaeologist found this ovarian mass, obviously they immediately noticed they were in the presence of a very unusual thing that should be carefully recovered and transported for further analysis in the laboratory,” study leader Sofia Wasterlain of Portugals University of Coimbra told Live Science. “However, at that time they did not know what it was exactly.”

Wasterlain and her colleagues considered other explanations for this little bony ball, such as a dead fetus or an ectopic pregnancy (where the embryo attaches outside the uterus) that calcified within the womans body.

But they concluded that this case looks most like a teratoma. It is not possible to tell if the tumor had any effect on the life or death of the woman, but her skeleton did not seem to have any changes related to the tumor, the report said.

“Some types of tumor’s that are thought to be characteristic of modern societies and commonly attributed to Western civilization are also found in past populations,” the researcher’s wrote in the study.

“This case also draws attention to the importance of conducting meticulous archaeological excavations in order to preserve rare, but significant findings.

During excavation of human remains, materials from body cavities, which may provide clues not directly accessible from the skeletons, should always be sought and recovered with care.”

This case in Portugal is not the 1st time a teratoma like this has been unearthed in a graveyard.

In 2013, archaeologist digging at a Roman necropolis in Spain reported that they found the 1,600 year old remains of a woman who had a calcified tumor in her pelvis.