German and Peruvian archaeologists have said that they have uncovered Peru’s oldest known monument,  a 5,500-year-old ceremonial plaza near Peru’s north-central coast. 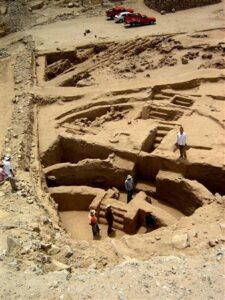 Carbon dating of material from the site revealed it was built between 3500 BC and 3000 BC, Peter Fuchs, a German archaeologist who headed the excavation team.

A circular plaza built 5,500 years ago has been discovered in Peru, and archaeologists involved in the dig, carbon dating shows it is one of the oldest structures ever found in the Americas.

“It’s an impressive find, the scientific and archaeology communities are very happy,” said Cesar Perez, the scientist at Peru’s National Institute of Culture who supervised the project. “This could redesign the history of the country.”

Prior to the discovery at Sechin Bajo, archaeologists considered the ancient Peruvian citadel of Caral to be one of the oldest in the Western Hemisphere, at about 5,000 years.

Scientists say Caral, located a few hour’s drives from Sechin Bajo, was one of six places in the world — along with Mesopotamia, Egypt, China, India, and Mesoamerica — where humans started living in cities five thousand years ago.

“The dating done by the German archaeologists puts it at about 5,500 years, but other parts could be older depending on what else is found,” Perez said.

Earlier finds near Sechin Bajo had been dated at 3,600 years.

“They had a highly-developed understanding of architecture and construction. This can clearly be seen in the fact that the materials they used survived for so long,” Peter Fuchs, one of the archaeologists, told the El Comercio newspaper.

The social gathering space that Fuchs and his colleagues found was built with rocks and adobe bricks.

Hundreds of archaeological sites cover Peru, and many ruins were built by cultures that preceded the powerful Incan empire, which reached its peak in the 16th century, just before Spanish conquerors arrived in what is now Peru.