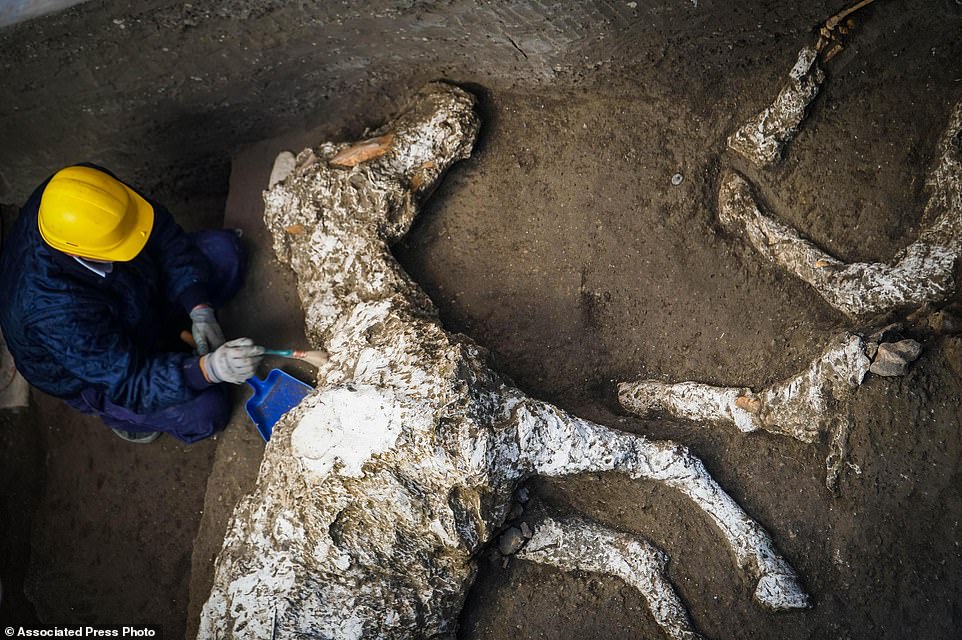 Remains of a horse that was killed while wearing its harnes during the 79 AD eruption of Mount Vesuvius have been found by archaeologists.

The majestic animal was tall, well-groomed and had a saddle fitted with richly decorated bronze trimming, experts have revealed.

The catastrophic eruption produced hundreds of tonnes of lava and toxic gas which killed and petrified the animals, as well as the other horses in the stable.

It was found in the ground of a large villa in a Pompeii suburb which scientists say may have belonged to a high-ranking military officials.

The equine beasts were revered by the Roman and were found in various different states.

Remnants of a harness were discovered on one of the animals which maintained most of its soft tissue thanks to the preserving properties of the ash than entombed it.

The non-harnessed individuals, which also perished in the wake of Vesuvius, were reduced to their skeletons.

Mr. Osanna also revealed that the villa may have belonged to a military general in the Ancient Roman empire.

Terraces in the villa overlooked the nearby Bay of Naples and Capri island.

The area was previously excavated during the early 1900s but later re-buried and the contents of the villa never fully investigated.

He hopes the villa eventually will be open for public visit.

The volcanic eruption of Mount Vesuvius destroyed flourishing Pompeii and Herculaneum, near present-day Naples, in 79 AD.

Mount Vesuvius, on the west coast of Italy, is the only active volcano in continental Europe and is thought to be one of the most dangerous volcanoes in the world.