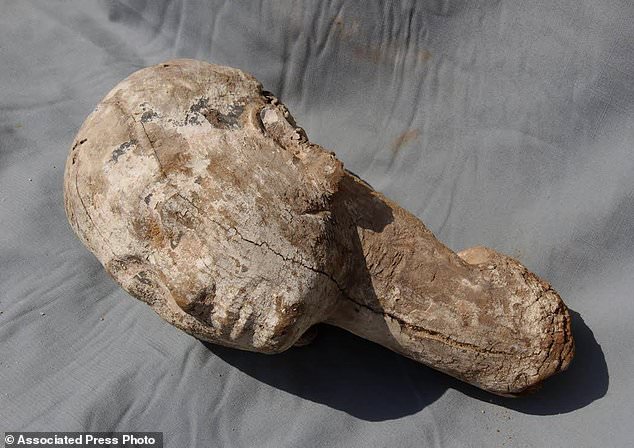 More than 4000 years back, ancient Egyptian artisans carved the likenes of a queen into a wooden statue and even bejeweled her highness with wooden earrings, according to a new discovery announced by Egypts antiquities ministry.

The life-size, 12-inch-tall (30 centimeters)wooden head was discovered in a disturbed layer of Earth near the queens temple in the Saqqara necropolis by a French and Swiss archaeology team from the University of Geneva.

Ankhnespepy II has a storied history. She was born a commoner, but then her elder sister, Ankhenespepi I, married Pharaoh Pepi I.

The two had a son named Merenre, Egyptologist Vivienne Callender wrote in a 2012 report for The Encyclopedia of Ancient History.

The queen acted as a regent for her 6-year-old son, Pepi II until he came of age, Callender said. Moreover, Ankhnespepy II married her nephew Merenre, a marriage that scholar considers to be “unique in Egyptian history,” Callender wrote.

Ankhnespepy II and her nephew had a daughter who was also named Ankhenespepi.

Given that Ankhnespepy II was not born a royal, it is astounding that “she was one of the most influential queens in Egyptian history,” Callender wrote in the report.

Earlier this week, archaeologist found a pyramidion — a capstone for an obelisk — in the same area where they discovered the wooden head, which is about an hours drive south of the Great Pyramid of Giza, Philippe Collombert, the head of the French-Swiss archaeology team and an Egyptologist at the University of Geneva, told the Egypt Ministry of Antiquities.

The pyramidion was made out of pink granite, and may belong to the queens funerary temple, Collombert said.

“It is a promising area that could reveal more of its secrets soon,” Mostafa Waziri, the secretary general of the Supreme Council of Antiquities in Egypt, said in a statement.

The archaeologist plan to continue their excavations, with the goal of finding other pyramid built for the queen and the associated funerary complex and artifacts, Waziri said.