Most possibly, the village was torched by a raiding party. Flames raced so quickly through the wooden roundhouses that the occupants fled without their belongings. The scorched remains, standing on stilts, fell into the river below, finally.

Buried in silt, the debris remained intact for 3000 years, maintaining in the Late Bronze Age a fascinating record of ordinary life.

This story is coming to light now. Next week, archaeologists will wrap up a £ 1.4 million excavation and start the years-long work of examining the many objects on the site. Today, they revealed some of the contents of the houses, including textiles, intact pottery, and metal tools such as axes and chisels, on a media tour in Whittlesey, U.K.

In the United Kingdom, the Bronze Age began between 4500 and 4000 years ago with the expansion of large monuments like Stonehenge. By the Late Bronze Age, farming was a focus of innovation. People developed extensive systems of fields and dug watering holes for livestock. Life wasn’t entirely bucolic; bronze swords and spears at many sites testify to a threat of violence. But domestic details are scarce. Little is left of Bronze Age houses except postholes and hearths.

The first clues that Must Farm, about 120 kilometers north of London, might reveal more were oak posts poking from beds of clay at a brick quarry. Tree ring analysis dated the posts to 1290 to 1250 B.C.E, and excitement grew when preliminary digs unearthed intact pottery and rare Bronze Age textiles. Wooden boats hinted at the vast wetlands that once covered the region.

A river ran through it

Built over a wide river with access to the North Sea and inland farms, these Bronze Age houses could have easily traded grain, meat, and metal tools. Yet not long after they were built, the houses burned down and collapsed into the water, preserving their contents. Archaeologists will learn much about daily life in the British Isles 3000 years ago. Click on each feature to learn more.

Charring and scorching by the fire helped preserve wood, textiles, and food. The river buried the debris in silt, and after the river changed course, a high water table kept materials from decaying over the millennia. “It’s a really, really special set of circumstances,” says archaeologist Kristian Kristiansen of the University of Gothenburg in Sweden. 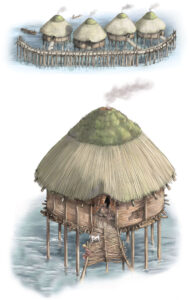 The ancient site was at risk in the brick quarry, so Historic England, a government agency, and the brick company Forterra funded an excavation. Since October 2015, staff with CAU have found five roundhouses that likely date to 900 B.C.E. (The older posts appear to have belonged to a causeway across the river that had fallen into disrepair by the time the houses were built several centuries later.) These stilt houses may have been located over the water for defense and to facilitate trade. Decorative glass beads, likely from the Balkans and the Middle East, are evidence of long distance commerce.

The roundhouses, each about 8 meters in diameter, were equipped with a rich inventory of domestic items. “You can’t find anything to compare with that,” says archaeologist Jens-Henrik Bech of the Thisted Museum in Denmark. Each house had axes, chisels, and gouges for woodworking. Sickles, sharpened on their outer edge, were probably used to process food. Spears could have been for hunting and perhaps fighting as well. “It has opened my eyes to the fact that the every household was using bronze tools in their daily work,” Kristiansen says.

The arrangement of artifacts could indicate what went on in various sections of the houses. All the structures contain a similar set of ceramics — ranging from tiny cups to fine bowls and coarse storage jars — which may reveal areas for cooking, eating, or storing food. Butchered lambs, cut in half along the spine, were found in the northeast part of each house, whereas the remains of wild pigs and deer had been dumped in the river, possibly reflecting a taboo against butchering wild animals indoors, Knight says.

Many vessels and pots contain charred grains of barley, wheat, and residues of cooked food. One bowl even sank with a spoon still lodged in the burnt crust of a stew. Chemical analyses “will almost allow us to get Bronze Age recipes,” says Alexander Gibson of the University of Bradford in the United Kingdom, who is not participating in the research.

Wood is also a rarity from the Bronze Age. Harry Fokkens of Leiden University in the Netherlands visited the site earlier this year to see how the roofs were constructed. “This is one of a kind,” he says. (In 30 years of excavations elsewhere, he has never found a solid piece of Bronze Age wood.) In addition to the building debris, the site has yielded many platters and buckets. The bottom of one bucket is covered with knife marks, suggesting people flipped it over to use as a cutting board.

Must Farm’s textiles are an especially precious find. The site has provided the largest collection of Bronze Age fibers and fabrics in the United Kingdom, says Susanna Harris at the University of Glasgow in the United Kingdom, who is collaborating with the team. Artifacts include balls of thread, hanks of yarn, and fine linen. Thread counts are as high as 30 per centimeter, comparable to the best cloth known in Europe at the time. “I counted them several times, thinking ‘This can’t be right,’” Harris says. So far she has not seen clues, such as cuffs, that would reveal whether the fabrics were part of clothing or served other functions.

The houses were relatively new at the time of their destruction, as indicated by fresh wood chips, green timber, and a lack of insect damage. Tree rings show that all the timber was cut in one autumn. A wooden palisade was built at the same time. Knight thinks the barrier was intended to protect the houses. “I’m absolutely convinced it’s saying, ‘Keep out. We’ll defend ourselves.’”

Karl Harrison, an archaeologist at Cranfield University in the United Kingdom, is studying the scorch marks and other fire damage. It may be possible to deduce the location of the pots and other contents, perhaps even their height above the floor. The idea is that is if enough heat built up inside the burning house, objects stored higher up will show different types of damage than those closer to the floor.

Harrison is hoping to determine whether the fire started inside a house — perhaps from a cook fire — or outside, which might point to arson, as many researchers suspect. Either way, the blaze appears to have spread quickly. “It was rapid, smoke-filled, and incredibly destructive,” he says. “You’d have a couple of minutes to scrabble around.”

The inhabitants apparently escaped, as no human skeletons have been found in the debris. They never returned to rebuild, or salvage the timber or possessions. “To me, the biggest mystery is why no one came back,” Harrison says. Yet that abandonment turned their ancient misfortune into a stroke of luck for archaeologists today.