Archaeologists in England find Skeleton of two men with legs chopped off:

The graves of 2 men whose legs were chopped off at the knees and placed carefully by their shoulders before burial have been discovered by archaeologists working on a huge linear site in advance of roadworks in Cambridgeshire.

The best scenario the archaeologists can hope for is that the unfortunate men were dead once their legs were mutilated.

It also appears their skull were smashed in, although that could be later damage.

“Was it to keep them in their graves and stop them from running away?” said Kasia Gdaniec, the senior archaeologist with Cambridge administration.

“Or had they tried to run away and was this a punishment – and a warning to everyone else not even to think of it.

The two men, believed to be from the late Roman or early Saxon period, were placed in graves – at right angles to each other and with their heads turned away – in a gravel pit getting used as a rubbish dump. 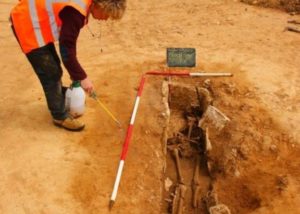 “Somebody really, really didn’t like these guys,” said Jonathan House, an archaeologist with the Mola Headland Infrastructure team.

“We found only afew human remains, and then this pair and the poor guy over there.”

Barely 50 metres from the 2 graves, the archaeologists found a timber-lined Roman well that had already begun to fill in – possibly because the spring failed – when the remains of another unfortunate were slung into it. That bodies  had been chopped off at the waist.

The archaeologists found no trace of pelvis or leg bones, however from their position the torso, head and arms were still intact when he was discarded like rubbish.

The Mola unit was among those working on one among the UK’s largest ever excavations, at 40 sites strung along 350 hectares wherever the traffic-choked A14 from Cambridge to Huntingdon is being widened.

Gdaniec finds the complete site quite sinister. “People talk about the archaeology of conquest, however I have never felt it as strongly as here.

The Romans arrive, the people who were here are completely subjugated, everything changes and isn’t  never the same again. We are not seeing trade and peaceful co-existence here, we are seeing enslavement.”

The site had been enclosed by a rather wiggly ditch, more a windbreak than either seriously defensive or a statement of power.

The Romans then arrived and by stupendous effort drove a huge ditch across it, almost 2 metres deep and three wide with the spoil heaped up into a huge bank.

Despite its size and the labour involved, there was no proof of large permanent Roman buildings and so the archaeologists believe it was a temporary camp on the march north towards Hadrian’s Wall.

Within the new enclosure, farming became far more organised and intensive, with wheat and other cereals, beans and root crops full grown.

The archaeologists, who worked through a winter once the heavy clay froze and then turned into a swamp of mud – it is now baked as hard as cement – know what labour such farming required: to Gdaniec it speaks of slave producing food crops for their conquerors.

The site had additionally produced scores of pottery kilns, some so tiny the archaeologists joked they must have been for egg cups, others large and sophisticated, producing domestic and storage pottery on an industrial scale. Tonnes of pottery were found on the excavation sites. 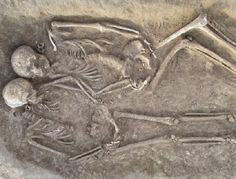 “We have some of the pottery they created,” House said. “It will be interesting to see if we can match it to pottery from other Roman sites. I wouldn’t be stunned if some of the pots from this field ended up on Hadrian’s Wall.”

The bizarre burials are among the most enigmatic finds from excavations that have uncovered bronze age barrows, iron age farms, Roman campsites and medieval villages.

At the project’s height, over  250 archaeologists were employed by Highways England, stripping back the previously unrecorded populations of a landscape now that now consists of large and rather featureless fields, wherever you’ll could walk for hours without encountering another human.

One of the skeletons has particularly fine teeth and most of the bones are in good condition, so carbon-14, DNA and other tests ought to be able to date the remains and find out where the unfortunates began their short lives – if not quite why they ended up mutilated and buried in a rubbish pit.