Archaeologists discover Roman Britain man whose tongue was replaced by a stone:

A gruesome and seemingly unique mutilation has emerged from a Roman Britain burial site in Northamptonshire – the skeleton of a person whose tongue had apparently been amputated and replaced with a flat stone wedged into his mouth.

The man had been buried face down, perhaps during fears that his corpse would rise to threaten people once again, archaeologists believe.

The burial site, at Stanwick near to the river Nene, dates from the 3rd or 4th century, when people would have lived in small farming communities.

It was discovered in 1991, but only now has research been conducted by archaeologists and other specialist at Historic England, formerly English Heritage.

Simon Mays, Historic England’s human skeletal scientist, told the Guardian that such a Romano-British mutilation was thought to be unique. He said: “This isn’t one thing that’s been identified so far in the archaeological records. thus it’s identifying a new practices …

The fact that he’s buried face down in the grave is consistent with somebody whose behaviour marked them out as odd or threatening with in a community.” 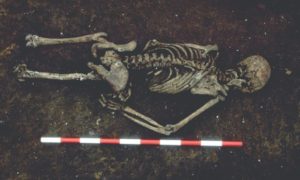 The skeleton was found buried face down, which Scientist  believe may imply the man had been feared as a threat to the community.

Ageing techniques are imprecise, but the man is believed to have been in his 30s at the time of his death.

One theory is that he had mental health issues and severed his own tongue. Another is that the amputation was a form of punishments.

Mays said: “There are Germanic law codes which talk about cutting people’s tongues out because they spread malicious accusations against other peoples. We are looking into it at the moment, however I don’t know whether there are any Roman laws to that effect.

Feedback I have had hasn’t indicated that there were … although that is of course still possible. We dont know much about practices in Roman Britain as opposed to Rome itself.”

Asked how archaeologists understand the tongue was amputated, Mays explained: “What gave us this idea is that there are other burials from Roman Britain where missing body parts in the grave are replaced by objects at the appropriate anatomical location.

There are only about Ten of these that we’ve so far been able to identify. The great majority are decapitations, where you have got a stone or a pot placed where the head should be.

We thought that, because of this, perhaps a stone might replace the tongue because it’s in the front part of the mouth where the tongue ought to be.”

Further confirmation of that theory came through tests on the bones. Mays said: “If you chop somebody’s tongue out, the mouth is full of bacteria and so you’re possible to get an infection.

We did indeed realize evidence of infection on the bones, so that seems to support the idea.”

He added: “The whole plan of replacing a severed body part with an object is interesting in itself. It could be an attempt to complete an incomplete body.

Or it may be an attempt to replace part of a body with something obviously inanimate, like a stone or a pot, to prevent the corpse from being complete.”

people who were buried face down have been found sporadically in cemeteries from the late Roman and early Saxon periods.

Some archaeologists have argued that such corpses might are feared as a continued threat to the community. Mays said: “It’s a way of stopping the corpse from rising from its grave and menacing the living.” There are have been much later examples of skulls with stones in their mouths.

The skull was originally lifted by archaeologists in a soil block in 1991. Only now has there been the manpower to study it in a laboratory, in controlled conditions to preserve all proof. The cemetery held 35 individuals. 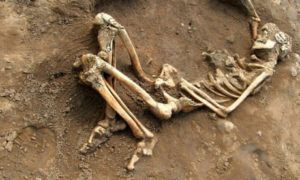 The tongue is believed to have been amputated, as a result of there are other burials in Roman Britain where “missing body parts are replaced by objects at the appropriate anatomical location,” Mays said.

“There are only about Ten of these that we’ve so far been able to identify. The great majority are decapitations, where you’ve got a stone or a pot placed where the head should be.

We thought that, because of this, perhaps a stone could replace the tongue because it’s in the front part of the mouth wherever the tongue ought to be.”