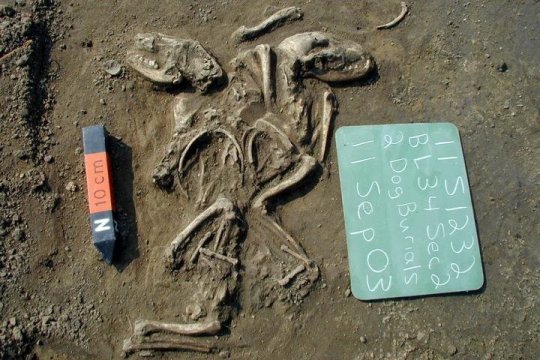 A study reported in the journal Science offers an enhanced view of the origins and ultimate fate of the first dogs in the Americas. The dogs were not domesticated North American wolves, as some have speculated, yet likely followed their human counterparts over a land bridge that once connected North Asia and the Americas, the study found.

For thousands of years, dogs lived alongside early Americans. This human-canine partnership has been gleaned through bones: The earliest dog remains found in North America were buried nearly 10,000 years ago in what is now Illinois. By 7,000 years back, other bones show that “we have lots of dogs all over the place,” said Angela Perri, a zooarchaeologist at Durham University in England.

But then, sometime after the fifteenth century, these ancient dogs vanished. European colonists — and the canines they brought with them — all but wiped the early dogs’ genetic signature from Earth, according to the largest-ever study of ancient and modern dog DNA in North America and Siberia.

“This paper makes really clear that the antiquated American dog appears to have almost entirely vanished, however, nobody seems to have any good explanations for why,” said Elinor Karlsson, a University of Massachusetts Professor who studies dog genetics and was not involved in the research, which was published Thursday in Science. “It’s almost like a huge chunk of history that’s been kind of lost.”

The analysts analyzed genetic material from 71 “pre-contact” dogs, whose remains spanned 9,000 years, and compared it with the DNA of 145 modern dogs. Just 5 of the modern samples contained even a hint of ancient dog — at most 4 percent.

The study also “pretty well put the kibosh” on any notion that the pre-contact dogs descended from North American wolves, said Perri, a lead author of the investigation. Instead, the analysis confirmed, the dogs were most closely related to an ancient Eastern Siberian stock.

They came with humans who moved from Asia, probably several thousand years after the first people arrived more than 15,000 years ago.

Those dogs remained isolated until about 1,000 years back when the Thule people brought over Arctic dogs that later gave rise to breeds such as the Alaskan malamute.

A few hundred years later, Europeans came with their domesticated dogs. A 3rd introduction occurred in the 19th century when Siberian Huskies were imported as sled dogs during the Alaskan gold rush.

“Essentially all the dogs, outside of the European ones, are coming from the same Siberian origin population, just at different points in time,” Perri said.

But it was the European wave of immigrants that spelled doom for American dogs, the study found. Perri said historical accounts suggest various possibilities for the demise.

Colonists may have slaughtered the native dogs because they viewed them as pests or to prevent them from sullying the bloodlines of their own dogs, which were utilized for herding, hunting, and protection. They may likewise have been eaten by starving settlers.

But Perri said the disease is the most likely suspect, and Karlsson concurred.

“If there were millions and millions of dogs all over this continent, and a small number of European dogs came in, there would have been plenty of time for them to do what dogs do, which is mate with each other and leave their DNA behind,” Karlsson said.

“At the same time, there was actually a big thing that was killing off all the humans at the time — infectious disease. That seems a much more likely explanation to me.”

The near-absence of pre-contact dog DNA in today’s dogs shows that breeds often touted as the oldest in the Americas, such as Chihuahuas, are actually Eurasian in origin, Perri said.

People bent on acquiring an ancient American breed, she said, should turn to malamutes or huskies, whose genes probably go back 1,000 years or so.

“We still have some Neanderthal in us,” Perri said. “But present-day dogs don’t have that ancient American dog DNA left in them.”

Despite their annihilation, the displaced exacted what Perri said she and her associates darkly joke is “the revenge of these native American dogs.”

While doing their examination, the researchers happened to find that the genes of one pre-contact dog live on in a sexually transmitted canine cancer. The cancer cells, which still spread from dog to dog today, are mutated cells that originated with an ancient dog, its first host, which in the examination found may have lived as long as 8,225 years ago.

Karlsson said it is still possible that the genetic signature of ancient American dogs will be found in modern-day dogs, not to mention other surprises.

“It’s a nice data set, but ancient DNA is a growing field. Individuals are going to be digging up and sequencing bones all over the Americas,” Karlsson said. “There’s a good chance we’re going to find out there’s more complexity out there.”

Perri did not discount that. That digging, much of it taking place in the area where people first crossed over to the Americas, might also yield evidence for the presence of dogs before 10,000 years ago, she said.

Some ancient remains excavated decades prior and labeled wolves or coyotes might actually be from dogs or hybrids, but it will take DNA analysis to find out, she said.

“We just hope constantly that we’re going to get a call that they discovered some kind of dog,” Perri said of ongoing excavations. If that happens, she added, researchers can “work our way further back in time.”