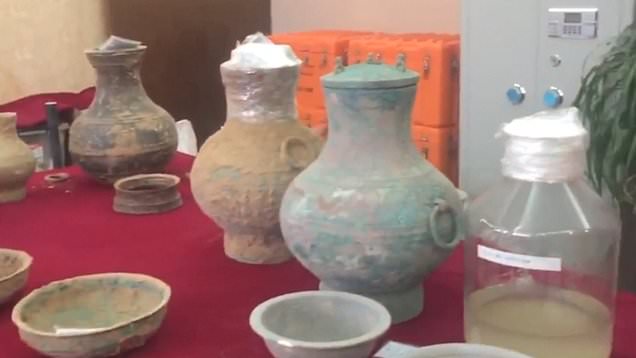 Did ancient Chinese peoples love drinking wine like the Europeans? The answer is yes.

Archaeologist claim to have discovered a pot of wine from more than 2,000 years ago in an ancient tomb in China.

The bronze vessel contains 3.5 liters of liquid which dates back to Chinas West Han Dynasty (202BC-8AD)

The tipple was Excavated in September inside a tomb thought to belong to a local official in the ancient capital of Luoyang in central China.

Researchers at Luoyang Municipal Institute of Cultural Relics and Archaeology were excavating a group of more than 300 ancient tomb in Luoyang’s Xigong district when they made the discovery.

Pan Fusheng, a deputy Analyst from the institute, told MailOnline that the liquid was pale yellow and had a slightly alcoholic scent when the team opened the vessel.

‘We think it was wine. The pot was a typical alcoholic container from the time,’ said researcher Pan.

He added: ‘We know that peoples from West Han loved drinking alcohol. Previously we have Discovered many drinking cups and goblets in the tombs.

‘It is probably because China was prosperous during the time and people lived a happy and comfortable life.’

After being buried for two millennia, the alcohol content in the liquid has mostly evaporated, which is why the ‘wine’ has such a light color, according to the experts. It has survived until today because the container was sealed well.

Pan and his colleagues plan to carry out further studies to determine the exact content of the liquid.

The wine vessel was Unrearthed from a luxurious tomb situated about 1,000 meters (3,280 feet) from the site of the old Luoyang town during the West Han Dynasty.

Occupying 210 square meters (2,260 square feet), the tomb has 6 parts, including the main chamber and 2 smaller chambers.

Scientist found one skeleton in the tomb. Its identity remains unknown. However, experts say the tomb likely belonged to a high-level government official.

‘He was not just rich. We think he could be the county’s magistrate,’ explained Pan.

Apart from the liquid, archaeologists found more than 100 relics inside the tomb, including dozens of pots and plates, large bronze serving trays, coins and an extremely rare lamp shaped after a goose – an animal well loved by ancient Chinese people.

A large number of jewelry made of jade were also unearthed in the main chamber.

Earlier this year, another team of Chinese archaeologist came across 300 milliliters of liquid likely to be wine in north-west China’s Shaanxi Province.

The liquid was discovered inside a commoner’s tomb and thought to be from the Qin Dynasty (221-207BC).

Experts from Archaeological Research Institute of Shaanxi Province believed the milky yellow liquid was a type of fermented alcoholic beverage.

The 210 sq. tomb has six parts, including the main chamber and two smaller chambers.

The identity of the tomb’s owner remains unknown, but researchers say the tomb likely belonged to a high-level government official judging from the relics (pictured) they found