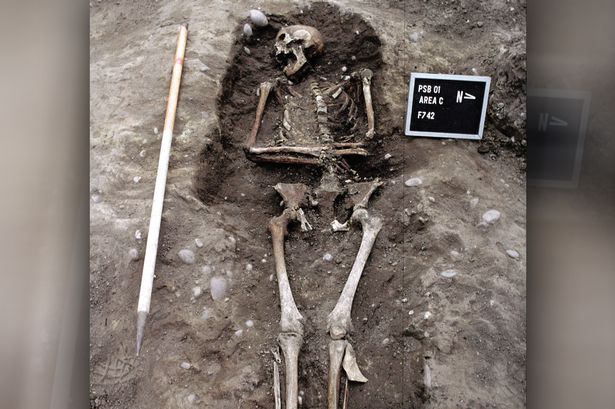 The skeleton of a young man who lived in the twelfth or thirteenth century and was fatally stabbed four times in the back, twice in the left shoulder and twice in the ribs, has been found during an archaeological dig at the Scottish Seabird Centre in North Berwick.

Specialists say the dig at the Kirk Ness site, carried out by Edinburgh based Addyman Archaeology, has strengthened the notion that the site was once inhabited as well as being the site of the parish’s church. Already, stone tools, lead objects, ceramic material and bones of butchered seals, fish and seabirds have been found there, as well as structural remains.

Archaeologists, who revealed various graves at the historic site, believe that the man was killed by a “dagger like” weapon, which had a symmetrical lozenge-shaped blade with very sharp edges and was probably at least 70mm long.

“Being at the centre of a 900-year-old murder mystery is very exciting for the Scottish Seabird Centre,” said Tom Brock, chief executive of the centre.

“As an independent visitor attraction, conservation and education charity, we are dedicated to inspiring people to enjoy, secure and learn about their local environment and this dig has allowed us great insight into how life was lived in the North Berwick area almost 1,000 years prior.”

Specialists believe there was a degree of “professionalism” to the killing, because of the shape of the weapon, which was a type thought to be carried mainly by the military, combined with the accuracy of the stab wounds.

It isn’t possible to ascertain whether the skeleton may have had other injuries, due to the legs and some of the right side of the body being cut away in later burial.

In any Case, the archaeologists have been able to conclude that the figure is that of a man over 20 years of age, slightly better built than average, with wear to the shoulder suggesting possible archery practice.

Rod McCullagh, senior archaeology manager at Historic Scotland, which supports the dig, said: “We respect the publication of the Kirk Ness report, which is the result of a successful partnership between Historic Scotland and the Scottish Seabird Centre.

Their expansion triggered an archaeological unearthing of an important medieval cemetery, which revealed the remarkable remains of buildings dating to the fifth to ninth centuries AD.

“These archaeological Founds and the subsequent analyses mark a significant advance in our understanding of the early history of North Berwick.”

Kirk Ness is well known as the site of the medieval church of the parish and later royal burgh of North Berwick but it has long been suggested that it was also a center of early Christian activity.