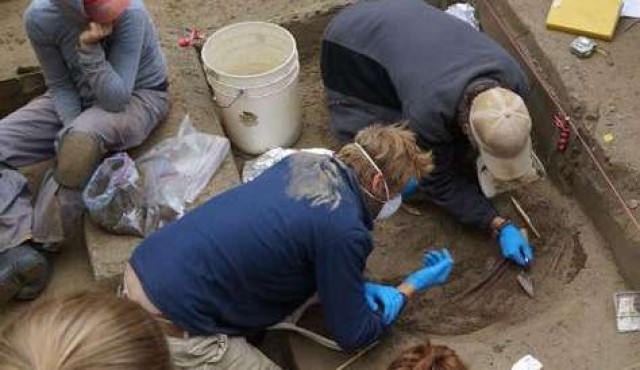 Dressed in moccasins and a rabbit-skin shroud, a man was laid to rest in a cave in Nevada about 10,600 years ago. Now, his mummy is helping scientists fill in the fuzzy picture of how humans initially migrated into the Americas.

Researchers have sequenced the genome of the Spirit Cave Mummy — the oldest human mummy found in North America — along with 14 other ancient people from the Americas.

The genome uncovered the mummy’s Native American ancestry, which has allowed his living descendants to properly bury him.

The similarities in the DNA from individuals who lived as far north as Alaska and as far south as Patagonia suggest the continents’first settlers spread out quickly, according to the study published Nov. 8 in the journal Science.

“These findings suggest that the first peoples were highly skilled at moving rapidly across an utterly unfamiliar and empty landscape,” study co-author David Meltzer, of Southern Methodist University, said in a statement.

“They had a entire continent to themselves, and they were traveling great distances at breathtaking speed.”

The Americas were the world’s last big land masses to be colonized by people. For much of the 20th century, scientists thought they had a solid explanation for how this migration occurred: Hunter-gatherers living in Siberia chased large game like mammoths across the Bering land bridge.

After the end of the last ice age, melting glaciers opened an ice-free corridor, allowing these pioneers to spread south.

But the story of the peopling of the Americas has gotten more complex in the last few decades. Archaeologists have found campsites, such as Monte Verde in Chile, that pre-date the ice-free corridor, which is thought to have opened around 13,000 years ago.

A few scholars have proposed that the first Americans could have arrived along the Pacific coast by boat.

New DNA evidence has also offered clues about the origins of the early populations, but until now the sample sizes of ancient genetic material from North America had been quite small.

Besides the new genomes presented in Science, a separate study, published in the journal a week ago, looked at the DNA of 49 people who lived in North and South America between about 11,000 and 3,000 years ago.

The genetic analysis in Science also demonstrated that the ancestral Native Americans split up into distinct populations, some of which had never been detected before.

For example, there were some South American Native Americans that had Australasian ancestry.

“Groups carrying this genetic signal were either already present in South America when Native Americans reached the region, or Australasian groups arrived later,” the first author of the study, Victor Moreno Mayar, of the University of Copenhagen, said in a statement.

“That this signal has not been previously documented in North America implies that an earlier group possessing it had vanished or a later arriving group passed through North America without leaving any genetic trace.”

The study also demonstrates that the man from Spirit Cave was genetically closer to contemporary Native Americans than other contemporary populations.

Proving this relationship was crucial for the Fallon Paiute-Shoshone Tribe, who live near Spirit Cave, to claim the man’s remains as an ancestor and to finally rebury him under the U.S. Native American Graves Protection and Repatriation Act (NAGPRA).

The mummy had been discovered in 1940 and kept in a museum for years. The tribe’s request for repatriation was denied, with government officials disputing the man’s ancestry.

“The tribe has had a lot of experience with members of the scientific community, mostly negative,” the tribe said in a statement, adding that the new examination “confirms what we have always known from our oral tradition and other evidence — that the man taken from his final resting place in Spirit Cave is our Native American ancestor.”

The Spirit Cave remains were repatriated in 2016, after a preliminary report from the researchers proved the link, and he was reburied in a ceremony earlier this year.

Similarly, in 2016, DNA evidence proved that the 8,500-year-old skeleton of the Kennewick Man or “Ancient One” was indeed related to contemporary Native Americans. Afterwards, those remains were repatriated to tribes claiming his heritage.