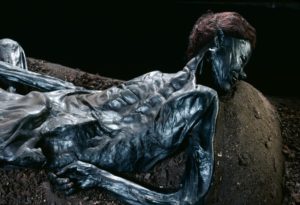 2 years after the discovery of the Tollund man, another bog body was found on the 26 of April, 1952, by local peat cutters in the nearby bog, Nebelgard Fen, situated near the town of Grauballe, Denmark.

Around the time of Grauballe man’s discovery, it was argued that the body belonged to that of Red Christian, a local peat cutter that mysteriously vanished in the area around 1887.

It was trusted that Red fell into the bog after drinking to much alcohol, as it was said that two drunk Englishmen from Cheshire suffered the same fate by falling into Lindow moss in 1853. It was not long before the body was sent to the Prehistory museum at Aarhus for examination and preservation. 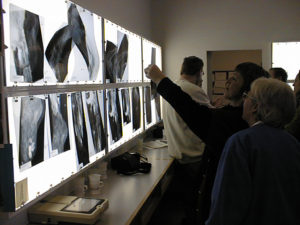 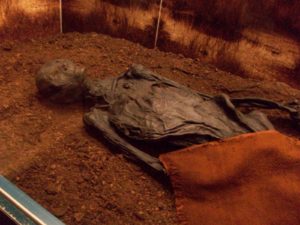 So, we know, based on a VISUAL examination, that Grauballe man was 30 years of age, was 1.75 m Height, still had hair and his hands showed no sign of no physical work.

But how could we know his age? How did we know that his hands showed no sign of labor? The basic answer is that ‘we’ use Science.

When Grauballe man was scientifically inspected, through a wide array of techniques, numerous features where revealed, such as what Grauballe man ate and what wounds he sustained. The scientific examination of Grauballe man has been listed below:

– Radiocarbon dating. Used to date the age of the body, which was around 310 B.C – 55 B.C. Placing the Grauballe man in the late Iron age.

-Scanning Electron microscope. Utilized for a closer examination of the body. Scientists, and Archaeologists worked out that Grauballe man was not a very hard worker by using the microscope to Determine his fingerprints, which were relatively smooth.

It was also used to show what Grauballe man had eaten. Results from an examination inside the stomach uncovered that Grauballe mans last meal consisted of porridge made from corn, seeds from more then 60 different herbs, and grasses which was uncovered to contain traces of a poisonous fungi, known as fungi ergot.

Grauballe man is believed to have died in winter or early spring as there is a lack of FRESH herbs and berries in his stomach.

-Forensic analysis. Used to determine the wounds that the body sustained, which consisted of a cut to throat that extended from ear to ear, cracks to the skull and right tibia, which was believed to be caused by a weapon, however when the body was re-examined again it was in-fact caused by the pressure in the bog.

It has also been noted that there were 4 missing lumbar vertebrae. Forensics have also been able to reconstruct the face of Grauballe man, as well as numerous other faces from various bodies.

Templates from the x-rays of the skull were utilized and the skull was sculpted from clay over these templates. CT scanning and Computer Generated imagery was also used to help modify the facial reconstruction. 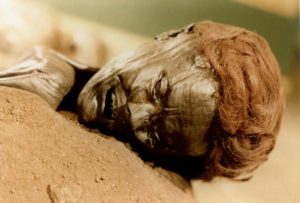 It is believed that Grauballe man was a criminal who paid the cost of death. But how would we know this? Based on the written sources of Tacitus, the Roman historian, the clans of northern Europe had a very strict society. So if one broke the law or committed an offence, they would be put to death.

A criminal or a prisoner of war would fit this description. But, what about his hands? As said before, Grauballe man’s hands showed no sign of manual labor, recommending that he was used for sacrificial purposes. Tacitus mentions that the clans of northern Europe have a connection to mother earth.

He says that during spring she visits these clans and upon departing, a selection of people are sacrificed . Based on the wounds, and the hands of Grauballe man, as well as sources to back it up, this seems to be Grauballe man’s likely cause of death.

But what about the poisonous fungi found in his stomach? New data suggests that if this fungi was to make Grauballe man sick, then it would of more then likely make him incapable to work.

It would have also caused agonizing symptoms which are historically known as St. Anthony’s Fire. Symptoms of this disease include convulsions, hallucinations and burning of the mouth, feet and hands. It is more than likely that Grauballe mans ingested the fungus by natural means.

If there was any bad luck in the village then the Grauballe man would be at the forefront of the allegations, which would regard him as being the cause of these woes and mishaps.

He would be seen as someone corrupted by an evil spirit, and therefore put to death and deposited in a bog far from town.

The exact cause of death is however a mystery and therefore there is no single explanations of how Grauballe man died.