After that, his body was discarded in the bog. He may have been killed in a ritualistic human sacrifice. Or this may very well be evidence of a 2300-year-old murder.

The Grauballe man was found by a team of Danish peat cutters in the Nebelgard Fen bog, near the village of Grauballe, on 26 April 1952. Initially, the town folk thought it was the body of a man known as Red Christian, another local peat cutter known for his drinking. Red went missing in 1887 and is believed to have stumbled into a bog and drowned.

The storey behind two bodies pulled out of English bogs in Cheshire was not this uncommon fate. Nevertheless, the townspeople thought that they should be sure, so they called Ulrik Balsev, a local amateur archaeologist, as well as the village doctor. The man’s cursory examination showed that he was naked and had a terrible grimace on his face.

Unable to determine the identity of the man or the cause of death, the locals contacted scientists at the Aarhus Museum of Prehistory. Professor Peter Glob came by the next morning and oversaw a team of peat cutters as they removed a large block of peat containing the body. 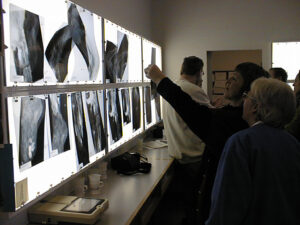 Once at the museum, Glob’s team performed a complete examination of the man. He was believed to have been around 30 years old at the time of death. He would have stood at 5 feet, 7 inches (1.75m) tall.

The hair still clinging to his head was about 2 inches (5cm) long, however, despite its red appearance, the man was probably not a red head in life (the color was most likely the result of being submerged in the bog). The man had stubble on his chin and his hands and fingers showed no signs of manual labor.

To everyone’s surprise, further scientific examinations, such as radiocarbon dating, revealed that the Grauballe man had lived in the late Iron Age, probably around 310 BC to 55 BC. Scanning the body with an electron microscope confirmed the visual suggestion that the man’s hands were unaccustomed to manual labor as his fingerprints were relatively smooth. 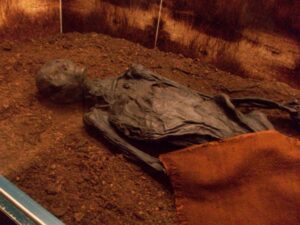 Analysis of the contents of his stomach showed that his last meal was corn porridge; there were also seeds from over 60 different herbs and grasses. The researchers were able to determine that the herbs and berries in his stomach were not fresh, suggesting that the man died during the winter or early spring. His stomach showed traces of poisonous fungi called fungi ergot.

Most striking of all was the forensic analysis that revealed the injuries to the body, notably the throat being cut from ear to ear. The study also disclosed that the man was missing four lumbar vertebrae. At first, scientists thought he had been beaten up, as his skull was fractured and right tibia broken; however, these injuries were determined to have happened after the Grauballe man’s death, perhaps by pressure from the bog, perhaps by the locals who found him.

Theories abound as to what caused the Grauballe man’s death. No items were found with nor any articles of clothing. It is entirely possible that the man was wearing clothes at the time of this death but they dissolved in the watery bog over time. Two prominent theories have emerged, both of which rely on present knowledge of life in northern Europe in the 3rd century B.C.

The first theory argues that the man was a criminal who paid for his crimes with his life. According to the contemporary Roman historian Tacitus, the tribes of the north were very strict and routinely put to death violators of the law.

The smooth hands could support this theory as in ‘he never worked an honest day in his life’. The northern tribes also engaged in frequent warfare amongst themselves, leading to another theory that the Grauballe man was a prisoner of war (such men were also routinely killed).

But why then was this man in the bog and not disposed of with the other criminals? The second prominent theory may have an answer for this. Some experts believe that the Grauballe man was killed for sacrificial purposes.

His hands are smooth because he never did work a day in his life – he had always been destined for holy purposes. Tacitus also describes the deep connections the northern Europeans felt for mother earth- “during spring she visits these tribes and upon departing, a selection of people are sacrificed” (Nicholson Museum).

The theory of a holy man destined for sacrifice to mother earth dovetails with another theory that is based on the ergot fungus found in his stomach. Ergot is probably best known as the fungus from which LSD was first synthesized from. 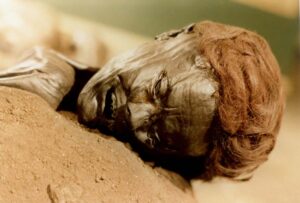 However, it is also the fungus consumed by the ancient Greeks in their Eleusinian Mystery rituals and possibly (accidently) consumed by the original accusers of the Salem Witch Trials. Ergot causes people to convulse and hallucinate. Other symptoms include a sensation of burning in the mouth, hands and feet and severe stomach cramps. Collectively, the symptoms are called St. Anthony’s Fire after the 1095 hospital of monks that first began to treat the disease.

The Grauballe man would have been too sick to work but he may perhaps have been used by a holy order to make predictions similar to the Oracle of Delphi, thus supporting the holy man theory. He then would have been deposited in the bog in reverence.

The related theory says that the consumption of ergot and resulting ergotism would have him a village pariah, one who was possessed by an evil spirit and who brought about nothing but woe and misfortune.

In such a case, the victim would have to be killed in order to save the village from his (or her) evil influence. He then would have been deposited in the bog to keep him far away from the village.