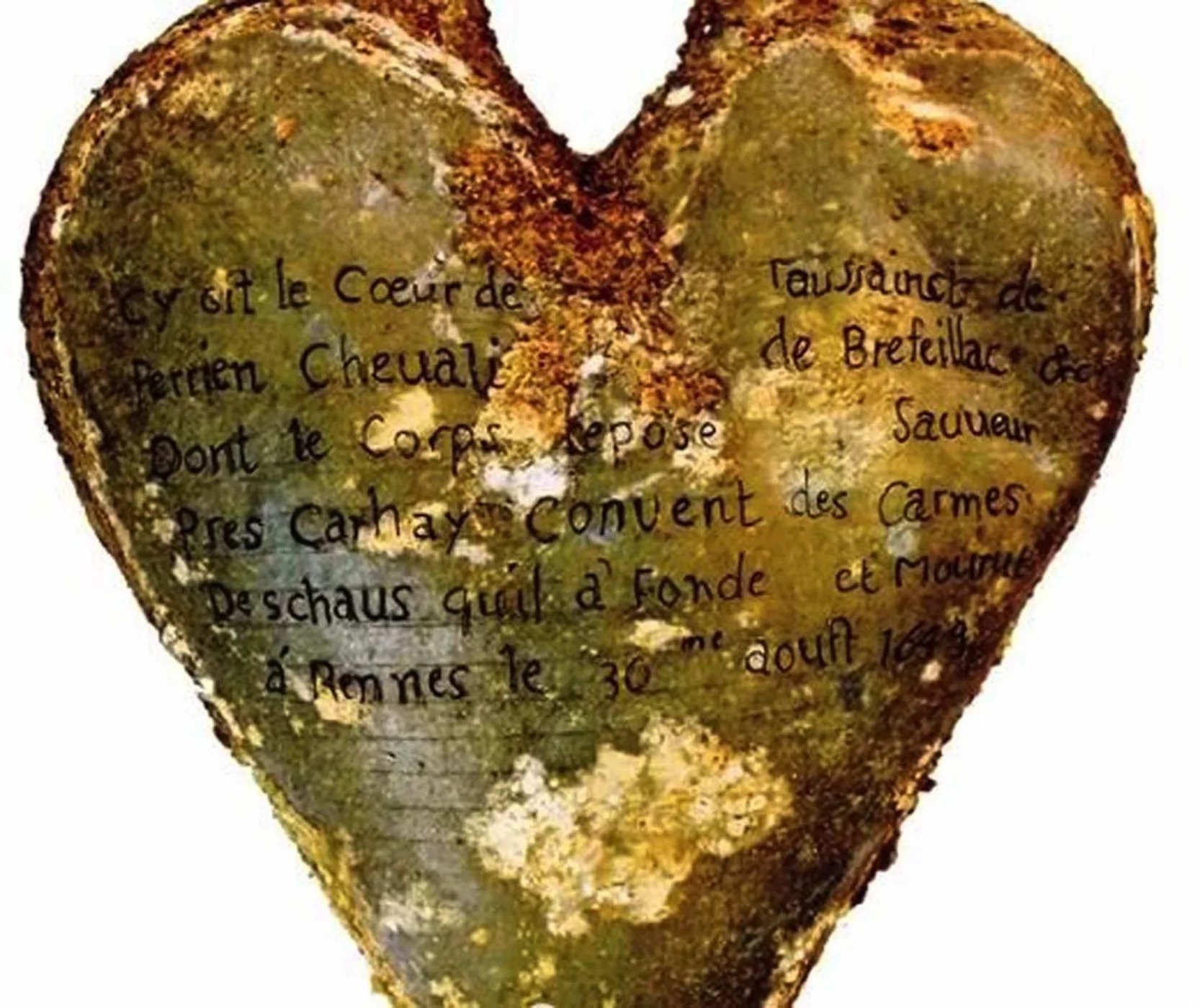 400 years after they were buried in heart-shaped lead urns, 5 embalmed human hearts have been found in a cemetery in northwestern France.

Scientists said they were able to peer inside those organs with modern medical imaging techniques, revealing the hearts chambers, valves and arteries, some still bearing marks of disease.

The hearts were found underneath the basement of the Convent of the Jacobins in Rennes, where archaeologist with France National Institute for Preventive Archaeological Research have been excavating grave for the past several years, ahead of a plan to turn the site into a conference center.

So far, the archaeologist have unearthed hundreds of burials dating back to the late sixteenth or early seventeenth  centuries, including the well-preserved corpse of a widow named Louise de Quengo, Lady of Brefeillac, who died in 1656.

De Quengo’s body had been sealed in a lead coffin, and when that container was opened for an autopsy recently, the womans clothes —a cape, linen shirt, wool leg warmers and cork-soled shoes —were remarkably still intact, according to a report in The Guardian.

“It was common during that time period to be buried with the heart of a husband or wife,” Dr. Fatima-Zohra Mokrane, a radiologist at Rangueil Hospital at the University Hospital of Toulouse in France, who led the new study, said in a statement. “It is a very romantic aspect to the burials.”

Four other heart-shaped urns had been found in the funerary vaults of elite-class families at the Convent of the Jacobins.

In an effort to learn more about the health of those 400-year old hearts, Mokrane and a team of scientist cleaned the organs and removed the embalming material so that they could scan the hearts using magnetic resonance imaging (MRI) and computed tomography (CT).

“Since 4 of the 5 hearts were very well-preserved, we were able to see signs of present-day heart conditions, such as plaque and atherosclerosis,” Mokrane said in a statement.

One heart showed no signs of diseases, but 3 others showed a buildup of plaque on the coronary arteries, which can cause a blockage of the heart, Mokrane and her colleagues found. The findings were reported at the annual meeting of the Radiological Society of North America, in Chicago.

It is not the first time scientists have studied preserved hearts from the archaeological record. After Englands King Richard I, nicknamed “Richard the Lionheart,” died in 1199, his heart was embalmed separately from his body and deposed in the church of Notre Dame in Rouen.

A study published in the journal Nature Scientific Report in 2013 found that the kings heart had been treated with myrtle, daisy, mint, frankincense, creosote and mercury—substances that were likely inspired by both biblical texts and the necessities of preservation.