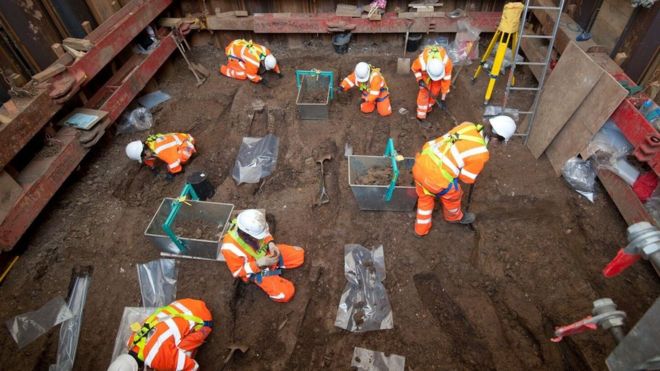 Archaeological work to remove 45,000 skeletons from a burial site to make way for HS2 construction has begun:

Protests and a memorial service were held before the site was closed to create a new terminus station.

HS2 said the dig in Camden would “add to our understanding of how this city transformed”.

The burial ground is one of 60 archaeological sites along the route between London and Birmingham which is being explored prior to the construction of the £55.7bn high-speed rail line.

HS2 said it was working with the Church of England to select a site where the skeletons will be reburied.

Head of heritage Helen Wass said the dig would “better our understanding of life and death in London’s 18th and 19th centuries, shedding light on health and disease, social status and lifestyle”.

Who was buried in St James’s Gardens?

The site was opened in 1788 as an overspill burial ground for St James’s Church in Piccadilly.

Archaeologists believe only 45,000 skeletons of the 61,000 buried there remain, with many having been removed during the expansion of Euston station in the late 19th Century.

People from all walks of life, from paupers to nobility, were interred at St James’s.

Among the most notable people buried were:

Captain Matthew Flinders, who led the first circumnavigation of Australia and is credited with giving the country its name.

The English navigator, explorer scientist created a chart of the land mass in 1804 while he was imprisoned on Mauritius.

Lord George Gordon, who was a political and religious activist who led the anti-Catholic Gordon Riots of 1780, where a huge mob marched on the Houses of Parliament.

Gordon was acquitted of being part of the trouble but died 13 years later in Newgate prison while serving a sentence for libelling the Queen of France.

What happened to the graveyard?

The site closed following the Burial Acts of the 1850s which prohibited nearly all burials within the city limits.

Many of the memorial stones were then removed and repositioned around the edges of the ground before it was reopened as St James’s Gardens in 1887.

Campaigners argued that building over the park would harm the local community and environment, and organised a memorial service to pay tribute to the people buried there.

However, HS2 said the project would provide “much-needed extra capacity at Euston”.

What other archaeological digs are taking place?

The archaeological work is described by HS2 as the largest ever in Britain with more than 1,000 people taking part.

Objects have already been discovered at other sites along the route, including flints at a prehistoric hunter-gatherer site in Hillingdon, north-west London

Other digs include at a medieval manor in Warwickshire, a Romano-British town in Fleet Marston, Aylesbury, and a World War Two bombing decoy in Lichfield

The project’s chief executive Mark Thurston said HS2 was “committed to sharing as much of our cultural heritage as possible.