Although he is older than the Giza pyramids and Stonehenge, the 5,300–year–old mummy of Otzi the Tyrolean Iceman continues to teach us things.

The latest study of the weapons he was found with, published in the journal PLOS ONE on Wednesday, reveals that Otzi was right-handed and had recently resharpened and reshaped a number of his tools before his death.

They were able to verify this by using high-powered microscopes to analyze the traces of wear on his tools.
The upper half of the Iceman’s body was accidentally found by a vacationing German couple hiking in the North Italian Alps in 1991.

Otzi was found with a dagger, borer, flake, horn retoucher and arrowheads. however some of the stone was collected from various areas in Italy’s Trentino region, which would have been about 43.5 miles from where he was thought to live.
“Through analyzing the Iceman’s toolkit from completely different viewpoints and reconstructing the entire life cycle of each instrument, we were able to gain insights into Otzi’s cultural background, his individual history and his last agitated days,” Ursula Wierer, study author and anthropologist, wrote in an email.

“The Iceman traveled with a compact lithic toolkit formed by few worn out, repeatedly resharpened tools, Mostly utilized for cutting plants. Ötzi was a righthander and had a quite good skill in pressure flaking by using his own functional retoucher.”

And compared with artifacts recovered from the Copper Age, when the Iceman lived, it seems that his tools were stylistically influenced by different Alpine cultures. Clearly, the 46-year-old Iceman, lived in the South Tyrol region of Northern Italy between 3100 and 3370 BC, survived by staying on the move.

That is, until he was violently killed. These new findings add to the wealth of knowledge we’ve gained regarding this mysterious figure. Here’s what else we know about the Iceman and how he was killed.

Otzi became a glacier mummy through a unique set of circumstances. He was crossing the Tisenjoch pass in the Val Senales valley of South Tyrol once  he was shot in the back with an arrow by a Southern Alpine archer and have became naturally preserved in the ice.

Otzi, his clothing and his tools were remarkably well-preserved.

The arrowhead is still embedded in his left shoulder and wasn’t found till 2001. He would have bled out and died shortly after because it perforated a vital artery.

There is additionally a wound on the back of his head, but that may have occurred when he fell when being struck by the arrow. 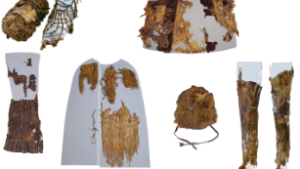 A cut on his right hand, indicating close combat, never had a chance to heal before he died. This means that conflict happened before he was shot, maybe hours or days before, and will have led to the second conflict that killed him.

The injury to his right hand would have made it difficult for Otzi to prepare his weapons just in case of another attack. This is most likely why the bow and arrows found with him were unfinished: to replace ones that were lost or damaged in previous conflict.

But the motive for his killing is unclear, , as a result of he was found with a very valuable copper ax. It is the only one of its kind ever found and could have functioned as a weapon and tool, as well as a status symbol. During the Copper Age, copper axes were owned by men of rank and buried with them.

Copper was the first metal used to make weapons. 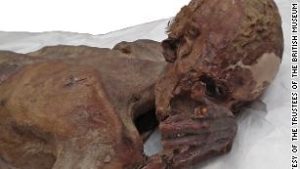 During the Copper Age, metal was extracted and smelted, making new trades and professions. This increased long-distance trades, boosted exchanges among cultures and led to the rise of new social groups.

Since 1998, Otzi and his artifacts are on display at the South Tyrol Museum of Archaeology in Bolzano, Italy. He was nicknamed Otzi because he was found in the Otztal Alps of South Tyrol.

His clothing, made from leather, hide, decorated grass and animal sinews, provides a unique window into the past because other clothing from that time has never been recovered.

His hide coat, leggings, loincloth, belt, fur shoes and bearskin cap would have kept him warm in the Icy cold, wet climate.

He additionally carried a type of wooden backpack, containers made of birch bark instead of breakable pottery, the ax, an unfinished longbow, a quiver of arrows in progress, a flint dagger, a retoucher to sharpen blades, birch fungus to start fires or use as a therapeutic, and a stone disc to connect things to his belt.

One of the most-studied mummies

Otzi was briefly “thawed out” in 2010 so researchers might take tissue samples, and remarkably, he was so well-preserved that red blood cells were recovered.

His nuclear genome was isolated in 2011. This discovered not only his blood type but his ancestry, appearance, medical conditions and predispositions to illness. 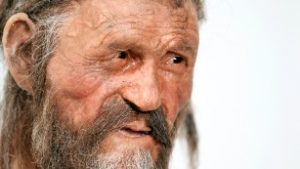 A reconstruction of Otzi, supported on forensics and 3D modeling, showcases what he may have looked like in life.
He stood at 5 feet 2 inches tall and had a slightly muscular build of 110 pounds, a narrow and pointed face, tanned skin, brown eyes, long dark hair and shaggy beard. His blood type was O-positive, and he was lactose-intolerant.

Otzi had a high risk of cardiovascular illness and traces of Borrelia, tick-borne bacterium that cause Lyme disease, in his genome. bacterium in his stomach could have led to stomach ulcers. He had intestinal whipworms.

His age was considered old at the time, and he in all probably had arthritis. There are tattoos everywhere  his body, specifically in places that may be considered therapeutic for someone with arthritis — especially because they could not be seen if he was clothed.

On his father’s side, Otzi had common ancestors with those who lived in Sardinia and Corsica and migrated to Europe from the east. His mother’s aspect might be traced to a population from the central Alps that doesn’t exist anymore.

His last meal, most likely an hour before his death, included grain and ibex and deer meat.
But several questions remain. What was his occupation? Why was he nomadic during a time of settlements? Why was he killed? The continued investigation into Otzi may uncover those answers in the future.