Archaeologists have found an ancient steam bath that the Maya likely used for religious ritual — and possibly relaxation — more than 2,500 years back.

The steam bath, found in the ancient Maya city of Nakum in what is now Guatemala, had fragmented ceramic vessels and obsidian tools in it — artifact that were possibly used for rituals, said excavation co-leader Jarosław Źrałka, an assistant professor of New World archeology at Jagiellonian University in Kraków, Poland.

“It is one of the oldests steam baths in Mesoamerica,” Źrałka told Live Science in an email, adding that the bath is “almost entirely carved in to the limestone bedrock.”

Źrałka and his team discovered the steam bath about 5 years ago, but they are still excavating the site.

“We initially thought that we were dealing with a tomb,” excavation superperviser Wiesław Koszkul, an archaeologists at Jagiellonian University in Kraków, told Science in Poland. “But while gradually uncovering subsequent part’s of the structure, we came to the conclusions that it was a steam bath.”

Both the ancient and modern Maya peoples associate steam baths with ritual activity, the archaeologist said. For instance, the ancient elite, including priest’s, likely used baths not just to wash their bodies but also to symbolically cleanse their souls before important events, the researchers stated.

“In the Maya belief’s, caves and baths are treated almost the same way: the places where not only the god’s, but also the 1st people were born and emerged from,” Źrałka told Science in Poland.

“They are also considered to be entries to the underworld, the world inhabited by gods and ancestor’s. Caves and steam baths were also associated with the harvest and the place of origin of life giving water.”

The steam bath certainly looked cave like when the archeologist first discovered it. First, the team discovered a downward sloping tunnel carved into the rock. But this tunnel is actually where the steam baths excess water flowed, the archaeologist soon discovered.

The Maya also constructed an easy way to enter the bath; both sides of the tunnel have stairs leading up to the steam rooms, which has rock cut benches where the bathers could sit.

Across from the entrance is an oval shaped hearth, where large stones were likely placed, heated up and then splashed with water to produce steams, the archaeologist’s said.

Then, the excess water would have flowed down a channel in the middle of the floor, toward the exit, the archaeologist added. It is also possible that the Maya made a giant structure out of wood, stone and mortar to keep the steam from leaving the room, the archaeologist’s said.

The Maya used the bath from about 700 B.C. to 300 B.C. before covering it with mortar and rubble. “Perhaps it was related to the change of dynasty, which ruled in Nakum, or other important change in the Mayan social and religious life,” Koszkul told Science in Poland.

Archaeologists have found other ancient Maya baths over the years, but most of those were only fragments of the original structures. “That is why our discovery of an almost completely preserved complex is so important,” Źrałka told Science in Poland. 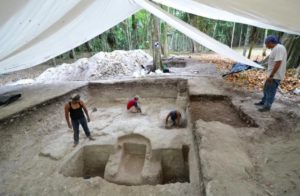 Archaeologists covered the site with a tent to protect it.