Ancient ships of death: Were they on a mission of politics or plunder?

For more than a thousand years, the ships of death have moulded unnoticed on the coasts of the Baltic Sea, sheltering the skeletons of thousands of young men of the Viking age and a trove of rich possessions.

After studying ships and bones, researchers have a chilling new theory to understand how many men died at the peak of their strength: they were diplomats from central Sweden, killed while on a mission to talk rather than fight.

The proposal, outlined in a study in the current issue of Antiquity, runs counter to previous interpretations that the men were raiders or warriors. Whoever they were, their bones give researchers a priceless window into life at the dawn of the Viking era. 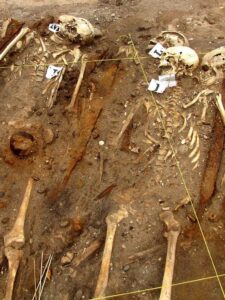 The “graves give us a rare – if not unique – glimpse of a Viking Age drama,” Ole Thirup Kastholm, a curator at Denmark’s Roskilde Museum who was not involved in the new study, says via email. “It (poses) the most intriguing mystery with plenty of questions to investigate: Who are the dead men? What was the purpose of their journey? … And perhaps the most interesting question: Who did it?”

Whoever interred the dead aboard two ships in what is now Salme, Estonia, in about 750 AD went about their work with great care and respect.

Many of the 41 bodies were carefully positioned, and valuables were scattered among the remains.

Researchers found swords bedecked with gold and jewels and hundreds of elaborate pieces from a chess-like strategy game called Hnefatafl, or The King’s Table. They also found two decapitated hawks and the skeleton of a large dog, which had been cut in half.

In life, men must have been fearsome figures. They were young and tall, at least one nearly six feet.

Analysis of their teeth, combined with the design of the buried artifacts, suggests that they came from central Sweden, not Estonia, says study co-author T. Douglas Price, an emeritus professor at the University of Wisconsin-Madison.

The skeletons on the larger of the two ships showed signs of violent death: stab wounds, decapitation marks, and an arm bone cleaved by a blade.

Following the discovery of the smaller ship in 2019 and the larger in 2020, researchers thought the men died on a mission of conquest or plunder. But the evidence didn’t quite fit.

The blinged-out swords seemed more suitable for projecting power than for fighting, and Viking-era warriors generally relied on spears and battle-axes rather than swords, study co-author Jüri Peets of Estonia’s Tallinn University says via email.

Game pieces and animals seem impractical for a military expedition but would’ve provided welcome amusement on a diplomatic trip. The men may have been on a voyage to forge an alliance or establish kinship ties, Peets says, when unknown parties set upon them.

Outside opinion on this explanation is mixed. The theory is “a far better solution than … (a) the military expedition has gone bad,” Kastholm says via email.

But Jan Bill of Norway’s Museum of Cultural History argues that the gaming pieces don’t rule out a voyage devoted to battle. “Soldiers have always had lots of waiting time, and games with them to shorten (this) time,” he says via email.

“Whether this group was on a diplomatic mission, or raiding, or both, I don’t think we can decide from the evidence of what was used as grave goods.” Study co-author Peets says the idea of a diplomatic mission is a “working hypothesis,” and research continues. 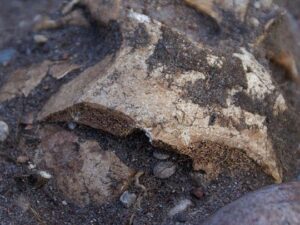 Young aristocratic men of the day routinely took part in warbands, says James Barrett of Britain’s University of Cambridge via email. Whether the men were intent on diplomacy or bloodshed, he says, the burial site “shows the cosmopolitan, albeit very dangerous, the character of the Baltic Sea area even before (or at the very start of) the Viking Age.”