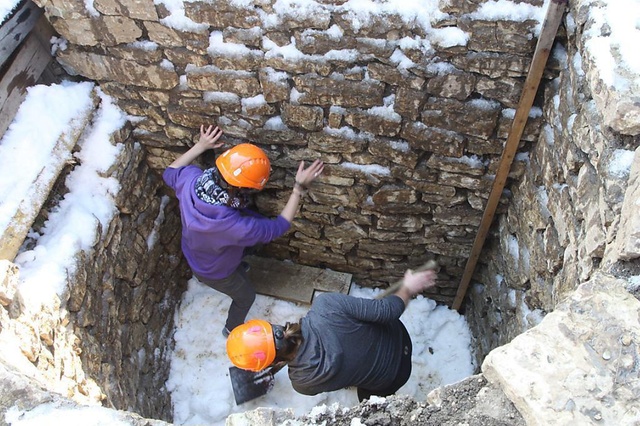 Swiss archeologists studying mysterious shafts uncovered at Augusta Raurica’s Roman site have shown successfully that they can store beer on ice for at least three months, adding weight to their hypothesis that the four – meter pits have been designed as ancient refrigerators.

A team led by Professor Peter – Andrew Schwarz at Basel University placed a bottle of beer in one of the shafts in April, packed in compact snow ice and covered with straw, among other things.

As they had hoped, the beer remained chilled when they fished it out on Thursday and took a celebratory swig, the researchers told Swiss news agency SDA.

They believe that Romans used shafts like the examples at Augusta Raurica, located some 20 kilometers from Basel, as cool stores during summer.

During the winter, the shafts were filled with snow and ice and then covered with straw to keep the space cool well into the summer months, allowing everything from cheese to wine – and even oysters – to be kept in warm weather.

It is the 3rd and most successful time the team has attempted to recreate the Romans’ cool box.

A first attempt failed after archaeologists filled the shaft with snow all in one go, only to find that the temperature inside remained above freezing point even in winter.

The 2nd  try had more success: the shaft was filled with snow gradually and blocks of ice were placed inside as well, which kept snow unmelted until June.

For their latest experiment, the team tried a technique borrowed from ice-makers on the Spanish island of Mallorca, who pack densely compacted layers of snow under thick straw for insulation.

They also lined the stone shaft with wood and covered the entrance.

The result was that the snow lasted “longer than the sceptics estimated, but not as long as the optimists hoped,” Schwarz told SDA. The next test will be to try storing fruit and vegetables in the shaft.

Schwarz said that he and his team would begin a new experiment in August or September in which they see how long fresh produce lasts in the shaft without the help of snow or ice.

While the tests can’t prove for certain that Romans used Augusta Raurica’s shafts as a fossa nivalis or ‘snow fridge’, they at least demonstrate that it would have been possible.

These latest findings bring us “somewhat closer to the matter,” Schwarz said.