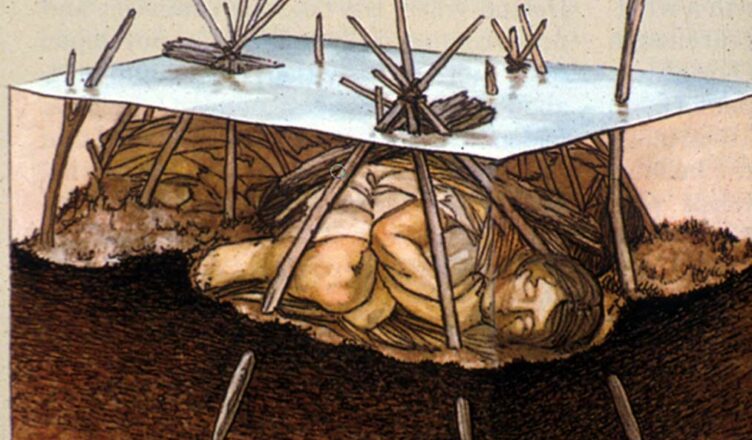 Ancient mummies from Florida’s Windover bog among the greatest archeological discoveries in the U.S.

Only after bones were declared to be very old and not the result of mass murder was Florida start to raise interest in the archeological world with the 167 bodies found in a pool in Windover.

Florida State University researchers came to this site, thinking some more Native American bones had been unearthed in the swamplands. They were guessing the bones were 500-600 years old. But then the bones were radiocarbon dated. radiocarbon.

The corpses range between the ages of 6,990 and 8,120. It was then that the academic community became incredibly excited. The Windover Bog has proven to be one of the most important archeological finds in the United States.

In 1982, Steve Vanderjagt, the man who made the find, was using a backhoe to demuck the pond for the development of a new subdivision located about halfway between Disney World and Cape Canaveral.

Vanderjagt was confused by a large number of rocks in the pond as that area of Florida was not known to be particularly rocky. Getting out of his backhoe, Vanderjagt went to investigate and almost immediately realized that he had unearthed a huge pile of bones. He called the authorities right away. It was only thanks to his natural curiosity that the site was preserved.

After the medical examiners declared them ancient, the specialists from Florida State University were summoned (another brilliant move by Vanderjagt- too often sites are ruined because experts are not called). Deeply intrigued, EKS Corporation, the developers of the site, financed the radiocarbon dating. Once the striking dates were revealed, the State of Florida providing a grant for the excavation.

Unlike the human remains found in European bogs, the Florida bodies are only skeletons – no flesh remains on the bones. But this does not negate their significance. Nearly half of the skulls contained brain matter.

The majority of the skeletons were found lying on their left sides with their heads pointing westward, perhaps toward the setting sun, and their faces pointing to the north. Most had their legs tucked up, as in the fetal position, however, three were lying straight. Interestingly, each corpse had a stake thrust through the loose fabric that enshrouded them, presumably to prevent them from floating to the surface of the water as decomposition filled them with air. This practical step was what ultimately protected the bodies from scavengers (animals and grave robbers) and kept them in their intended positions.

The find provides unparalleled insight into a hunter-gather community that existed 3,500 years before the Pyramids were built in Egypt. The skeletons and the artifacts found with them have been studied almost continuously in the decades since their discovery.

The research paints a picture of a hard but good life in pre-Columbian Florida. Though living mainly off what they could hunt and gather, the community was sedentary, indicating that whatever hardships they may have faced were small compared with the benefits of the area they chose to settle in.

Theirs was an incredibly caring society. Children’s bodies were almost all found to have small toys in their arms. One older woman, perhaps 50, showed signs of having several broken bones. The fractures occurred several years before her death, meaning that despite her handicap the other villagers cared for her and helped her even when she could no longer contribute significantly to the workload.

Another body, that of a 15-year-old boy, showed that he was a victim of spina bifida, a crippling birth defect where the vertebrae do not grow together properly around the spinal cord. Despite his many deformed bones, evidence suggests he was loved and cared for throughout his life.

These discoveries are mind-boggling when one considers how many ancient (and even a few modern) societies abandon the weak and deformed.

Contents found within the corpses’ as well as other organic remains found in the bog reveal an ecosystem rich in diversity. 30 species of edible and/or medicinal plants were identified by paleobotanists; berries and small fruits were particularly important to the community’s diet.

One woman, perhaps 35 years old, was found with a concoction of elderberry, nightshade, and holly in the area where her stomach would have been, suggesting that she was eating medicinal herbs to try and combat illness. Unfortunately, the combination did not work and whatever afflicted the woman ultimately took her life. Interestingly, the elderberry woman was one of the few bodies stretched out, as opposed to curled up, with her face pointing downward. In other Native American traditions, elderberries were used to fight viral infections.

Another striking difference between the Windover Bog people and their European counterparts is that none of the Floridians suffered violent deaths. The bodies include men, women, and children. Roughly half of the bodies were younger than 20 years old when they died but some were well over 70 years old.

This was a fairly good mortality rate for the place and time. The presence of brain matter in 91 of the bodies suggests that they were buried quickly, within 48 hours of death. Scientists know this because, given the hot humid climate of Florida, brains would have liquefied in bodies not buried quickly.

Somewhat amazingly, DNA analysis of the remains shows that these bodies share no biological affiliation with the more modern Native American groups known to have lived in the area. Recognizing the limitations of modern technology, about half of the Windover site was left intact, as a protected National Historic Landmark, so that in 50 or 100 years’ researchers could return to the bog and excavate untouched remains.