The approximately 10,000 human-made caves dug in the Himalayas or tunnelled from above are concealed within the Himalayas, about 155 ft from the earth. They remain one of the World’s greatest archaeological mysteries as it is not known who built them and why.

In the mid-1990s, archaeologists from Nepal and the University of Cologne researchers started investigation of piled caves and discovered some dozen skeletons, all at least 2000 years old. 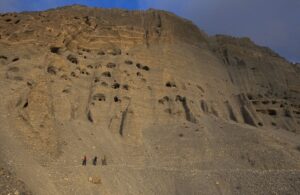 Since then, groups continued to investigate the remote Upper Mustang site. Those who have seen the mysterious caves say the effect of them on the cliff face makes it look like a giant sandcastle.

“Quite honestly when I got there it was even bigger and more grand than anything I ever could ever have imagined,” said Cory Richards, adventure photographer who joined a team of explorers to unearth hidden relics of the ancient and remote caves.

On another assignment to Mustang the following year, videographer Lincoln Else was hit by a falling rock, fracturing his skull.

The difficulties and dangers experienced by the team raised the question as to how the original inhabitants managed to climb into the caves, and indeed to build them.

“This was real exploration. It’s dangerous it’s loose rock it’s scary. Everything is loose, everything around you feels like it’s crumbling. You feel like when you’re climbing everything is going to collapse,” said Richards. 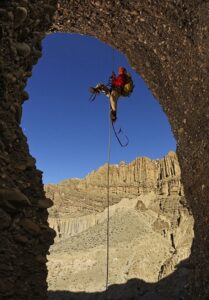 Most of the caves that have been found are empty, though some showed signs of domestic habitation: hearths, grain-storage bins, sleeping spaces, and others contain elaborate murals from Buddhist history and calligraphed manuscripts.

Scientists have divided cave use in Upper Mustang into three periods. As early as 1000 BC, the caves were used as burial chambers. 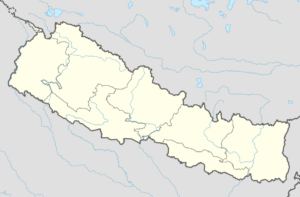 During the 10th Century, the region is thought to have been frequently battled over, and consequently, placing safety over convenience, families moved into the caves, turning them into living quarters.

By the 1400s, the caves functioned as meditation chambers, military lookouts or storage units as people moved into villages.

Richards described his experience of visiting the caves and, as a photographer, trying to convey their beauty: “Essentially at the end of the experience, what was illuminated to me the marriage of science and exploration and culture is the ultimate in how we bring the world to everyone.”