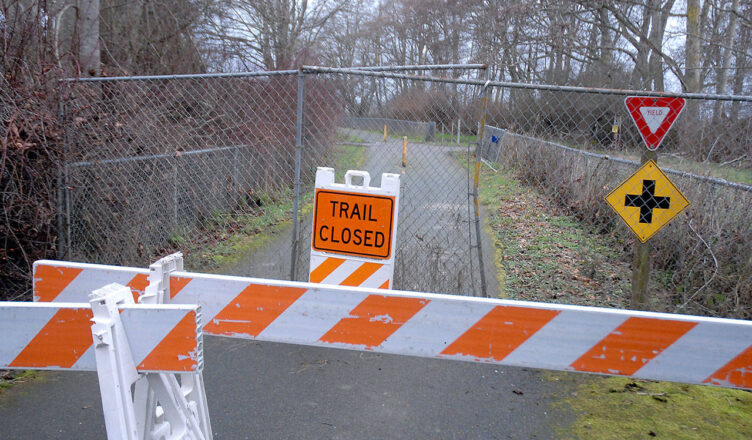 Authorities Thursday began research into the origins of bones found on the beach of the Waterfront Trail beach while repairs began on unstable embankments that recently yielded the ancient remains.

On the shores of the Port Angeles Harbor, which is a part of the Olympic Discovery Trail, a man and his son found a complete human skull including the mandible and a possible scapula along on January 14.

A possible portion of a human hip bone was found by a person walking the beach Jan. 18, and state and tribal officials found more bones Wednesday while inspecting the area, tribal and Clallam County officials said Wednesday and Thursday. The remains, all found in the same general area, are being examined by state archaeologists. If they are found to be Native American, they will be repatriated to tribal members.

State Physical Anthropologist Guy Tasa and Director Allyson Brooks of the state Department of Archaeology and Historic Preservation did not return calls for comment Thursday.

White said the harbor waterfront was occupied centuries ago by a Klallam fishing village whose inhabitants harvested halibut. The bank along the Waterfront Trail where the remains were found “is collapsing,” White said.

“Storm surges hammered out that bank.”

White was joined Thursday at the site by Jamestown S’Klallam Tribal Historic Preservation Officer David Brownell, and a consultant with Willamette Cultural Resources who is under contract with the city. The work being conducted to repair washed-out sections of harbor embankment where the bones were found is not an archaeological dig, White said.

The city of Port Angeles, in partnership with Clallam County, is repairing two miles of city-owned trail embankments from the former Rayonier pulp mill east to Morse Creek that includes where the bones were found.

The city had budgeted $50,000 for erosion- and slide-related repairs that City Manager Nathan West said Thursday could be completed by Feb. 16, when the “fish window” that allows work closes.

West said If repairs are not completed by the end of February, the impact could be felt by the Feb. 29 Frosty Moss Olympic Discovery Relay.

“We are hoping to get completed in a matter of weeks,” West said.

“As these remains have been found, the emphasis has been on protecting cultural resources and, secondarily, the events,” White said the erosion-damaged beachfront area where the remains were found is being covered with textile fabric held down with riprap.

He said the same archaeological repair process was followed at the site of the Klallam village of Tse-whit-zen, located about two miles west of the trail and dating back about 2,700 years.

The village was discovered in 2003 on Marine Drive as the state Department of Transportation began cutting into cement slabs and digging soil in preparation for building a $100 million graving yard for a Hood Canal Bridge repair project.

According to a Sheriff’s Office case report, the recently found human bones were discovered at about 3:50 p.m. Jan. 14 as a snowstorm was developing that would dump 18.5 inches on Port Angeles. Authorities interviewed Wednesday had said the find was on Jan. 15.

A man described as a medical professional and his son found the skull, mandible and unidentified bone while walking the beach, according to the Clallam County Sheriff’s Office case report. A supplemental case report described it as “a complete skull with a lower jaw.” It had four teeth affixed to the lower jaw.

It was in an area of a large slide, said Brian King, Sheriff’s Office chief criminal deputy. Six inches of snow was already on the ground when the Sheriff’s Department retrieved the remains, which were FedExed to Tasa.

“Based on the recent history of other burial remains being unearthed in and along with this location, it is likely this is an archaeological find,” Sheriff’s Deputy William Cortani said in the case report. The find was listed as a “suspicious person/vehicle” on the Peninsula Communications call-for-service log that is made available to the public.

While finding human remains is not uncommon, according to authorities, a code specific for that is not available to dispatchers, Karl Hatton, regional communications director for Peninsula Communications, said Thursday.