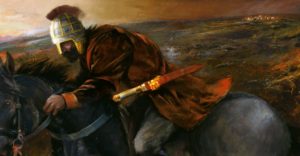 The remains of ancient Viking Age tombs dotted throughout Iceland were studied by archeologists. Throughout their studies, warriors from this period of time appeared to be so fond of their war horses that they were often buried with their steeds.

Now, after analyzing the DNA from the horses buried with Viking Age warriors, it has been established that many of these animals were males, according to the study which was published in the January edition of the Journal of Archaeological Science.

There are 355 known Viking burial sites in Iceland at the moment. Of these sites, there are 175 horses in 148 tombs. The Vikings appeared to so much appreciate their horses that there was evidence in the grave sites that “specifically for burial” killed the horses.

The previous studies of the known grave sites had brought experts to the assumption that male horses were vital to the Icelandic people buried there. As in humans, the width of pelvic bones can determine the sex of a horse.

In addition, canine teeth only present in male horses can also help to identify the sex of these animals. However, it is very hard to find the sex of horses within these sites unless the animals are particularly well-preserved. So, up until the release of the new study, experts were making assumptions without the absolute identity of the animals being known.

The new study used DNA samples from the preserved remains of Twenty two horses from Seventeen burial sites. Researchers discovered that of the Nineteen horses found in graves, Eighteen of these were males.

“The sex ratio and age distribution of the killed horses suggests that there was a well-formed structure behind the rituals, in which the chosen horse acted as symbolic representative,” study co-author Albina Hulda Palsdottir, a doctoral candidate with the Centre for Ecological and Evolutionary Synthesis at the University of Oslo in Sweden, told Live Science in an email.

“The conscious choice of males was perhaps linked with the characteristics of stallions; virility and aggression could have been a strong symbolic factor.”In addition, three horses found within the burial sites were not buried with such symbolic statement. These animals were all found to be female and it is believed that they were probably eaten rather than buried with the warriors.

While it has been discovered that Viking Age warriors seemed to have a penchant for male steeds on the battlefront, it doesn’t necessarily mean that male horses were preferred overall by the Icelandic people during the Viking Age.

“Since horses are so hard to sex morphologically unless fairly well-preserved, whole skeletons are found, we know very little about the varying roles of male and female horses in the past,” Palsdottir said.