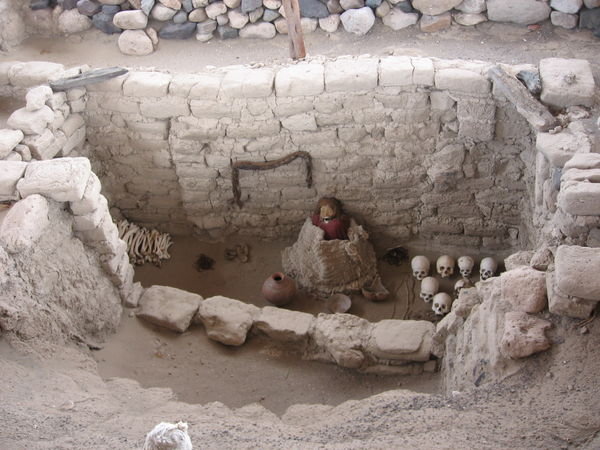 Archeologists uncovered 6 ancient tombs in the village of Tnort Tret, in the Takor municipality of Prey Veng, concluding that the tombs date from the Funan era between the 1st and 5th centuries AD.

Funan is the name given to an Indianised Southeast Asian state centered on the Mekong Delta that existed in that period.

Voeun Vuthy, director of the Archaeology and Prehistory Department at the Ministry of Culture and Fine Arts, said 6 archaeologists excavated the location, found at the construction site for a road, for 10 days and uncovered the tombs. The dig in Prey Veng province was completed last Tuesday.

The body parts and pieces of jugs and other pottery items discovered are to be kept at the department for further examination, Vuthy added.

5 tombs were located in the upper layer of the ground with one at a depth of 2.3m. They found tools and other items buried with the bodies, he said.

“After the preliminary assessment, we have concluded that there were people living in this area between the 1st  and 5th centuries because this area was the foundation of Funan-era culture.”

“Only human labour was used in the excavation because we did not want anything to be damaged. We want to preserve the fragments of bodies and pottery because these items illustrate the history of the era.

We didn’t want the tombs, which are evidence of the history of Cambodia, to be buried under a road,” Vuthy said.

He said that all the items collected will be preserved as national treasures for future generations.Nuth Bun Doeun, Prey Veng town police chief, said the ancient tombs were located in a hilly area long considered sacred.

The site did not belong to anyone, but villagers said people prayed there as the hills were ancient and sacred.

Development had caused traffic congestion in the town, so the government ordered the building of Prey Veng’s third ring road.

Experts feared the project would impact the ancient tombs, with the Ministry of Culture and Fine Arts assessing and excavating the site, he said.

“The ancient area is on the tallest hill with some trees. The villagers do not exactly know what the area is, but they have been worshipping there for many years. Before the archaeologists came, they held a religious ceremony for the excavation,” he said.