Ancient Germanic lord was buried with circle of six women

A spectacular, ancient tomb has been discovered in Germany. Archeologists uncovered what they believed was the ancient German grave of a German lord of 1500 years old. In the same unusual German tomb six female skeletons arranged in a circle were found. Researchers have raised the possibility that the six women were either human sacrifices , or voluntarily died to accompany their lord in the next world, as part of some death cult.

A few years ago, a stunning burial ground was discovered during construction on a chicken farm in the area of Saxony-Anhalt near Brücken-Hackpüffel. It was instantly recognised in decades as Germany’s most significant archaeological discovery. Around 60 graves were discovered and a mound tomb was at the heart of the find. A great many grave goods were found in the tomb, including rare glassware made in Gallo-Roman workshops.

According to Arnold Muhl, who works at the State Museum of Prehistory in Halle, among the other finds in the graves were “several silver-gilded robe clips, a sword and a shield boss made of iron as well as a gold coin of the Eastern Roman emperor Zeno around 480 were found,” reports the Daily Mail .

Süddeutsche Zeitung quotes the archaeologist Susanne Friederich as saying that “The unique finds suggest that higher-ranking personalities have been buried here.” It is a miracle that the burials have remained untouched for centuries.

The site was protected because it was in a valley that was covered by earth and this acted as “a protective layer,” reports the Süddeutsche Zeitung . The exact location of the ancient German tomb has not been revealed for fear that the burial ground would attract the attention of looters.

At the “secret” ancient German tomb location, archaeologists discovered the grave of a German lord. It was found in a mounded tomb that measured 13 feet by 13 feet (4 x 4 meters). And at the heart of the tomb was a bronze cauldron , which was taken out of the earth in a special cast and removed to a German laboratory. 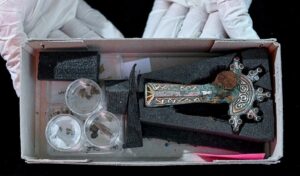 It is believed the 60 or so other burials were added to the site later. Researchers believe that the burial grounds were once adjacent to a royal court or center. However, the remains of the lord have not been recovered. The ashes may have been placed in the bronze cauldron that was found in the mound.

The evidence suggests that the burial dates from about 1500 years ago. Bild reports that this is from the “ migration period ,” when Germanic tribes were migrating into western and southern Europe, often fleeing from the Huns. This ultimately led to the fall of the Roman Empire and the emergence of modern nations such as France.

What is remarkable about this ancient German tomb and the lord that was once buried there is that it is “is surrounded by six women buried in a radial alignment from the pot, like the hands of a clock,” reports The Times .

The arrangement of the female remains is unique for Europe and probably once held great symbolic meaning. Also found in the tomb were the skeletons of 11 animals including dogs and horses that had been reburied in the tomb. The research has focused on the identities of the female skeletons and how they came to be in the tomb.

It is possible that the interred women were the wives and concubines of the dead lord. They may have been killed as part of a religious sacrifice or to accompany him to the world of the dead. This was a common practice in ancient times across a number of ancient cultures. We know this from Roman sources, such as Tacitus. Moreover, the archaeological record from this period has shown that Germanic peoples practiced human sacrifice.

The Evidence Found In The Tomb May Suggest A Death Cult

The Times reports that there is “speculation that they may have died in a death cult.” Possibly, the women sacrificed themselves in some ritual. They may have volunteered to die with their dead husband or master. The Daily Mail reports that “Speculation is rife about the cause of the bizarre arrangement, but researchers say it is too soon to talk of a ritualistic cult death.”

Researchers have examined the evidence found at the burials to identify who was buried at the site. The remains of the textiles found in the burials were very helpful. According to The Times “analysis of the clothing fabrics showed that they were Saxons, Thuringians, and members of the Alemanni group of tribes on the Rhine.” All of these tribes played a critical role in the decline and fall of the Roman Empire.

Work is continuing at the site.  Further analysis of the bones and grave goods may reveal more about the local community during the Germanic tribal migration period. Moreover, they could provide more evidence for understanding the strange female burial arrangements, and help to determine if they were sacrificed or killed themselves as part of a death cult.