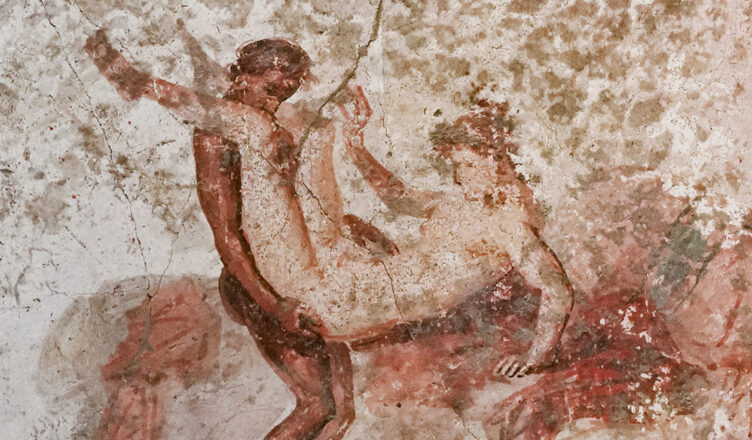 The Romans were much more open about sex than we are today. Phallic symbols frequently appeared in both religious and everyday imagery and could be found everywhere from the walls of temples to the city streets.

Like the anxious men who began excavations at Pompeii in the 18th century and discovered more about the ancient Italians than they had bargained for – such as phallic-shaped lamps – historians of sex are regularly confronted with case studies from the past that challenge their own ethics.

Murals from brothels and buildings that served as brothels (such as inns, lunch counters, and taverns) show fair-skinned women, naked (except for the occasional breast band), with stylised hair, in a variety of sexual positions with young, tanned, athletic men.

The figures sport on beds that are sometimes ornate and festooned with decorative quilts.

In buildings identified as brothels, the murals may have been intended to arouse clients.

They may also have functioned as pictorial menus or even served as instruction manuals for more inexperienced customers.

In buildings identified as private residences, the scenes were most likely decorative but also designed, perhaps, for titillation.

Contrary to the idealized images, the brothels themselves provide evidence that the women worked in cells, usually only big enough for a narrow bed.

The absence of windows in most attests to the darkness of the cells, as well as limited airflow.

Excavations also suggest that the cells were usually without doors, which implies that the rooms may have been curtained.

They have also revealed stone beds. Wooden beds, as well as pallets, were likely also used but would have perished in the eruption of Mount Vesuvius in AD 79.

The conditions in which the women worked were of no concern to brothel owners, clients or anyone else for that matter, as most sex workers in ancient Italy were slaves.

As the ancient attitude towards slaves was one of indifference at best, and violent disdain at worst, the lives of women were no source of empathy to those outside their class.

The sex workers fulfilled a utilitarian function and nothing else. Confined to the premises by (usually) male pimps who provided them with only their most basic needs, the women were essentially cut off from the outside world.

This rendered them vulnerable to the whims of both pimp and client alike.

Women who worked the streets in Pompeii often waited around archways and other standard locations such as graveyards and public baths.

In larger towns and cities, where control of the sex trade was harder to manage, some of these women may have worked without pimps.

Those who made up this percentage of workers were mostly freed, slaves and poor freeborn women.