An Anglo-Saxon girl had her nose and lips cut off as punishment, an ancient skull shows

Around 1,100 years ago, a teenage girl in early mediaeval England met a horrible end, her nose and lips were cut off by a sharp weapon, and she may have been scalped, according to a new analysis of her skull.

Nobody knows why the face of the young woman has been mutilated, but her injuries consist of the punishment of women historically given to female offenders.  st If her injuries were punishable, she is the first person recorded in English-Saxon England to receive harsh punishment for the disfigurement of her face. Researchers wrote in a new study published online in the Antiquity journal on 1st October.

“We can only define what has occurred in this case, but the extremely formalised nature of the injury of women indicates punishments for particular acts such as or at least a suggestion of sexual deviation,” study lead researcher Garrard Cole, an honorary research fellow at the Institute of Archaeology at University College London.

The skull was originally discovered in the 1960s, during excavations prior to the construction of a housing development in the village of Oakridge, in the southern county of Hampshire, England.

However, scientists didn’t analyze the skull at the time, and it’s unclear whether the skeletal remains of the body were also buried there.

Instead, the skull was put in a collection curated by what is now the Hampshire Cultural Trust. Recently, the skull was rediscovered during an audit of that collection, and “the cranium was still covered with soil, indicating it had not been examined,” said Cole, who decided to study it with his colleagues.

A few tests revealed clues about the individual: An anatomical analysis indicated the skull belonged to a 15- to 18-year-old; a DNA analysis showed the individual was female; radiocarbon dating suggested that the teenager lived sometime between A.D. 776 and 899; and an analysis of different isotopes, or versions, of elements from her teeth suggested that she didn’t grow up in an area with chalk hills, meaning she wasn’t born or raised in most of central and eastern southern England.

The team also assessed the skull’s wounds. The marks around the nose and mouth were severe. “There were at least two cuts through the bone marking the side of the nasal aperture and the bone between the nose and the upper front teeth,” Cole said. 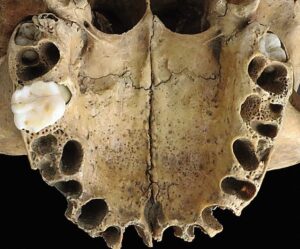 “Both wounds seem to have been made by a sharp, thin-bladed weapon. In the Anglo-Saxon period [A.D. 410 to 1066], this is most likely to have been an iron knife. The other sharp-bladed weapon — the sword — would be too heavy and massive.”

The researchers also noticed a shallow cut across the teenager’s forehead, “which we interpreted as evidence for hair removal,” Cole said. Usually, scalping leaves multiple cut marks, but it’s possible that poor preservation of the skull over hundreds of years obliterated the other cut marks, he said.

The teenager likely didn’t survive this traumatic event, as the edges of the wounds show no signs of healing, the researchers wrote in the study. Even if her lips and scalp had been left alone, “the injury to the individual’s nose could have been sufficient to cause her death, as the wound would probably have damaged the network of arteries in the back of her nose,” the researchers wrote. Once cut, these arteries would have gushed blood, and she may have choked to death, they wrote.

The events that led to her demise remain a mystery. Did a mob punish her for a perceived offense? Did local authorities sentence her to a harsh punishment for allegedly committing some type of transgression or deviancy? Without more evidence, archaeologists may never know.

However, “facial mutilation for females, and its parallel castration for males, does seem to be a long-established, worldwide practice,” Cole said. And while Anglo-Saxon rulers did later document this punishment into their formal law codes during the 10th century, this case happened before that. “We now know the practice did happen, but have no idea of how frequently it was applied,” Cole said.