A Viking sword found in Norway, 1,200 years old, could still be used today 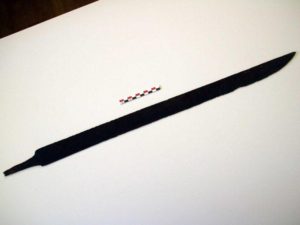 A hiker walking on an old mountain trail in Haukeli (on the border of Telemark County, Norway) discovered a more than 1,250-year old Viking sword.

Goran Olsen discovered the sword stuck among some rocks near the road when he sat down to rest. It was in a really good condition for an item that is a thousand years old.

The sword was taken to the county council of Hordaland, where it was examined by the local archeologists working for the council…

They feel lucky and grateful that they received the sword and that they had the opportunity to study it. County conservator Per Morten Ekerhovd said, “Finding Viking age remnants that are so well preserved is quite unusual.

It might be used today if you sharpened the edge”Preliminary analysis shows that the 30-inch (77 centimeters) iron sword is from about AD750, and according to Ekerhovd, it is an important find that will shed light on early Viking history.

Wrought-iron arms and armor were expensive in that time and they were used as a high-status symbol.

Probably the owner of this sword was a rich and influential person, not some average Viking.

Professor Alexandra Sanmark, a Viking expert at Highlands and Islands University in Scotland, said: “The common idea about Vikings was that they wore large metal helmets, but they probably wore leather helmets.

The metal would have gone into making these fabulous weapons, which have more like steel, it is really high quality.”Norwegian archeologists think that the sword is part of burial for a high-status person.

Wealthy people used to be buried with 100’s of valuable objects: weapons, armor, riding gear and even with their horses.

The Viking sword has now been sent to the University Museum of Bergen for further study and restoration.

Haukeli’s mountains are buried in frost and snow for 6 months, but due to climate change, artifacts have increasingly started to turn up along mountain paths in the last few years. Because of this, more clues are revealed how the Vikings lived and died.

Jostein Aksdal, an archeologist with Hordaland County, plans to start excavating at the location where the sword was found ; he says, “If we find multiple objects or a tomb, we might find the story behind the sword.”