Once a fire reached in house on a river in the Bronze Age. It was a small wooden house built on stilts and the residence of a family whose life has changed.  When embers began to engulf the walls around them, some members of the household were in the middle of a meal, their spoons stuck inside soup bowls they had to leave behind.

The family escaped and never returned. Their house collapsed into the river, where its contents cooled instantly, preserved in clay.

For 3,000 years, there remained the family’s worldly possessions, untouched and unspoiled — a physical record, in unprecedented detail, of how people lived back then. 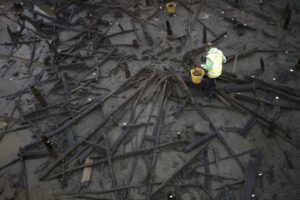 Now the house’s watery burial ground is the site of an extensive excavation project by the Cambridge Archaeological Unit, which has been studying the timber remains of a settlement dating to the end of the Bronze Age and located at a large brick quarry in Peterborough, Britain.

A team of 14 Cambridge University researchers have been working on the settlement, made up of a number of wooden houses. They most recently unearthed the well-preserved charred roof timbers, offering an initial indication of how the homes were internally structured. 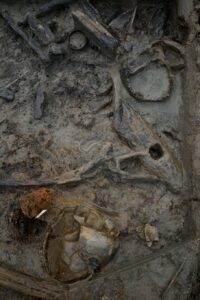 Whereas most Bronze Age excavations yield mere fragments of items from that time, this find is the first out of Britain to provide the complete contents of entire homes, preserved thanks to the river environment (the modern-day Fenlands) into which they fell.

“The finds, taken together, provide a fuller picture of prehistoric life than we have ever had before,” David Gibson, the Cambridge unit’s archaeology manager, said in a phone interview early Wednesday. “At a normal site, you might get one or two metal finds: axes, chisels, gouges. Essentially, what we’ve got is the archaeology of a complete home, preserved.”

Among the artifacts recovered are 29 pottery vessels, jewelry, spears, daggers and a range of textiles. The last are particularly exciting, Gibson said, because an analysis may reveal the colors and patterns in the garments, giving a rare glimpse into the fashion of the time.

The family who occupied the houses were probably of some wealth, as sheep, pig and cattle bones indicate that they had access to dry-land resources, in addition to the nine log boats, also found by the researchers, that they used to travel along the river.

The artifacts further demonstrate that this wasn’t an “insular island society,” Gibson said. The glass beads have links to central Europe, the pottery to northern France and the metalwork to Spain.

A few weeks ago, there was the most mortal discovery yet: a human skull, half-buried in the silt. It lay near what researchers believe to be the doorway of one of the houses; the remains, perhaps, of someone who didn’t make it out.

If the skull is attached to a complete skeleton, the research possibilities will be endless, starting with a look at bone structure.

In many ways, the fire that devastated the settlement has proven serendipitous to the excavation project. Food that was still inside the pots essentially turned to a glass as a result of the flames’ heat, opening up the possibility for researchers to discern what people were eating when disaster struck.

This potential has drawn comparisons to the site of the volcanic eruption in ancient Pompeii, Italy, another catastrophic event precisely preserved for more than a thousand years.

“People’s lives stopped at that point with the fire,” Gibson said, “and that moment in time has been captured.”

The Cambridge team expects to continue excavating into April, after which the key artifacts will be conserved and put on public display. Given the holistic quality of their excavation, they hope that their project will become a model for understanding the Bronze Age with more specificity than has ever been accomplished.

At the very least, Gibson laughed, they’ve got “BronzeAge” trending on Twitter — and the project’s website crashed Tuesday night from the sheer number of people trying to learn about a fire that struck a house on a river some 3,000 years ago.