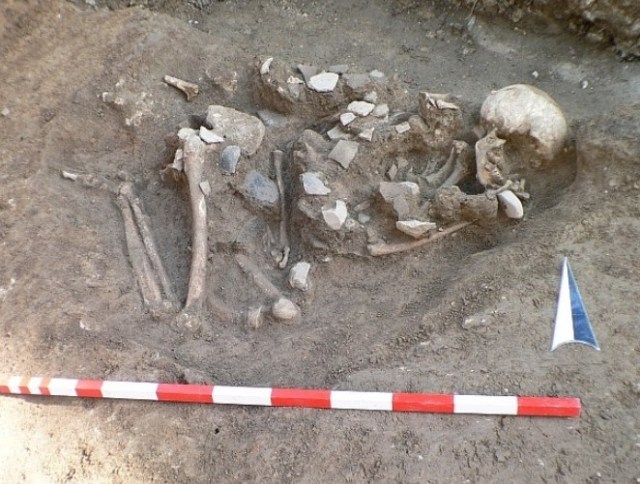 A 6,500-year-old grave of a man holding in his hands a stone ax scepter has been discovered:

A 6500-year-old grave of a man holding in his hands a stone ax scepter has been found by archaeologist’s excavating a recently found necropolis from from the Chalcolithic (Aeneolithic, Copper Age) in the town of Kamenovo, Kubrat Municipality, Razgrad District, in Northeast Bulgaria.

A total of 7 graves were discovered in the Chalcolithic necropolis in Kamenovo when it was first discoveredback in September 2015.

However, these were all graves of women and children (of the Mediterranean anthropological type), with the newly discovered grave being the 1st male grave to be found there to date, reports local news site Darik Razgrad.

Shortly before finding the necropolis, in the spring of 2015, the same archaeological team found in Kamenovo a 6,500-year-old Chalcolithic workshop for flint tools (still containing a large number of completed or unfinished flint tools).

Now the team led by Assoc. Prof. Yavor Boyadzhiev from the National Institute and Museum of Archaeology in Sofia and Dimitar Chernakov from the Ruse Regional Museum of History, and Dilen Dilov from the Razgrad.

Regional Museum of History as the deputy head of the expedition, have continued their excavation of the Chalcolithic necropolis in Kamenovo.

The newly found grave of the male who was buried holding a stone ax dates back to 4500-4300 BC, reports local news site Top Novini Razgrad.

Inside the grave, the archaeologists also discovered a bead from the shell of the Spondylus mollusk which was harvested in the Mediterranean in prehistoric times.

According to Boyadzhiev, the man might have worn the bead on his neck but the researcher’s are yet to figure out whether the adornment consisted of a single bead or more beads.

Their presence has been interpreted as a testimony to the commercial ties that the region of today’s Northeast Bulgaria had with the Mediterranean coast during the Copper Age.

Lead archaeologists Yavor Boyadzhiev has explained that the male grave from the Chalcolithic necropolis has been discovered in a shallow layer, almost right under the modern day asphalt in the yard of a former elementary school in Kamenovo.

The prehistoric man was buried in a fetal position, lying on his left side, holding the stone ax in his hands, with his body oriented in an east west direction.

Boyadzhiev says the bodies of women and children found in the Kamenovo necropolis so far were buried in a similar way, and some of the graves were organized in rows.

He does point out that anthropological examinations is yet to confirm the sex of the person in the newly found grave.

The archaeologists also points out that there are no traces that the stone ax was ever used as a tool for labor or as a weapon in battle, and it was probably made use of solely as a symbol of power.

“The temptation to announce that he was some kind of a chieftain is huge but we are not going to do that because we have got no categorical evidence,” Boyadzhiev has told the Bulgaria Dnes daily, adding that the man could have been a warrior involved in the protection of the workshop for the production of flint tools.

The archaeologists believe that the flint workshop started operation in the early Chalcolithic, ca. 4,800 BC, within a Chalcolithic settlement.

The local people extracted flint stone from deposits near today’s towns of Ravno and Topchii located near Kamenovo, processed it, and distributed the flint tool they produced all over the southern part of the Balkan Peninsula.

Boyadzhiev adds that the Chalcolithic flint tool workshop in Kamenovo has turned out to be much larger than the archaeologist’s originally suspected.