A 28,000-year Old Pyramid is Discovered in West Java Indonesia

Indonesian scientists had discovered an ancient pyramid –  that is hidden in plain sight for thousands of years – buried inside a mountain in Indonesia. 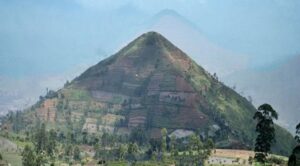 Scientists become the first Europeans to discover Gunung (Mount) Padang in the early 20th century, they must have been awestruck by the sheer scale of their ancient stone surroundings.

Scientists claimed that a pyramid-like hill on top of Mount Padang in West Java isn’t natural – it as made by humans thousands of years ago.

According to scientists, there’s a series of channels and chambers belonging to a 10,000-year-old pyramid buried underneath Gunung Padang in West Java. They believe Gunung Padang’s layers of rocks were man-made and its slopes span at least 150,000 square meters of land.

The exploration proves that the structure does not cover just the top but also wraps around the slopes covering about 15 hectares area at least.

Scientists noted, “The structures are not only superficial but rooted into greater depth.”

Researchers Danny Hilman Natawidjaja told Live Science, “It’s a unique temple. It’s not like the surrounding topography, which is very much eroded. This looks very young. It looked artificial to us.”

Scientists used an array of techniques to peer underground including ground-penetrating radar surveys, X-ray tomography, 2D and 3D imaging, core drilling, and excavations — the researchers gradually uncovered several layers of a sizable structure. It spread over an area of around 15 hectares (150,000 square meters) and had been built up over millennia, with layers representing different periods.

At the very top were pillars of basalt rocks framing step terraces, with other arrangements of rock columns forming walls, paths, and spaces. They estimated this layer to be about 3,000 to 3,500 years old. 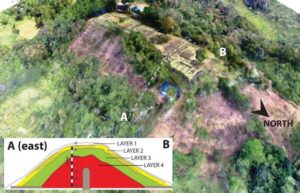