What happened to this wood in the majestic petrified trees of Arizona’s forests? They say petrified wood is so ancient that it has originated in the prehistoric period. But do you know how petrified wood was made? This guide will show you how. What is petrified wood and how is it formed?

Fossil wood is considered to have grown when the plant material is buried by sediments. When the wood is buried deep in the muck, it is protected from decay caused by exposure to oxygen and organisms.

When bodies are preserved in deep water, the minerals migrate into the soil in the groundwater and absorb the initial plant content such as silica, calcite and pyrite.

Even very expensive minerals can infiltrate wood-like opal. The result is a fossil made from the original woody material, which often shows preserved details of tree bark, wood, and cellular structures.

This is probably the most popular petrified park in the world. The Petrified Forest National Park near Holbrook in northeastern Arizona has established millions of years ago. About 225 million years ago, this was simply a lowland with a tropical climate with a dense forest.

Rivers made by tropical rainstorms washed mud and other sediments. This was where you would find giant coniferous trees 9 feet in diameter and towering 200 feet lived and died.

Fallen trees and broken branches from these trees were buried by rich river sediments. Meanwhile, volcanoes nearby erupted numerous times and the ash and silica from these eruptions buried the area.

Eruptions caused large dense clouds of ash that buried the area and this quick cover prevented anything from escaping and of course, nothing can also move in, even oxygen and insects. In time, the soluble ash was dissolved by groundwater through the sediments. The dissolved ash became the source of silica that replaced the plant debris.

This silication process creates petrified wood. Aside from silica, trace amounts of iron, manganese and other minerals also penetrated the wood and this gave petrified wood a variety of colors. This is how the lovely Chinle Formation was made.

So how was this area discovered? Millions of years after the Chinle Formation were created, the entire area was dug and the rocks found on top of Chinle have eroded away.

What was discovered was wood here was much harder and resistant to weathering compared to the mudrocks and ash deposits in Chinle. Wood that was taken from the ground surface as nearby mudrocks and ash layers washed away.

The park covers 146 square miles.   It’s dry and often windy, but the elevation of 5400 feet means that it’s not as hot as desert areas at lower altitudes, and it’s mostly covered in the grass rather than cacti and other desert plants.

Of course, the big attraction here is the petrified trees, which grew here about 225 million years ago when this part of Arizona was at a much lower elevation near the shores of a large sea to the west.

As well as the trees, many fossilized animals such as clams, freshwater snails, giant amphibians, crocodile-like reptiles, and early dinosaurs have been found here.

The silica in the logs crystallized into quartz, but often iron oxide and other minerals were mixed in, producing extraordinarily beautiful kaleidoscopic patterns and colors. 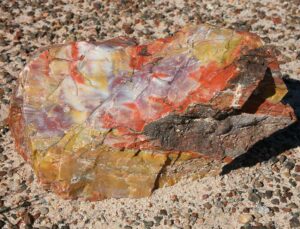 The petrified trees are often so attractive that a whole industry grew up around hauling them out from where they lay and cutting them up to make decorative furniture, wall displays, bookends, and other items. Theft from the park has always been a problem, and it’s estimated that around 12 tons of fossilized wood are stolen each year.