Footprints left by what could be one of our first human ancestors to appear in Britain on a Norfolk beach. The preserved roads, composed of 49 soft sedimentary rock impressions, are considered to be about 900,000 years old and may change scientists’ understanding of how early humans traveled across the planet.

The traces of this find were discovered in the last Summer when hard sea washed the sand off the foreshore in Happisburgh, Norfolk. The finding is “million to one.” The discovery is now now made public and is believed to be the earliest evidence of early human beings yet to be found in Northern Europe.

Anthropologists and evolutionary biologists from all over the United Kingdom have researched the tracks and thought they may be related to an ancient form of a human ancestor named Homo antecesor, or the Pioneer Man.

The tracks include up to five different prints, indicating a group of both adults and children walked across the ancient wet estuary silt. They are the earliest direct evidence of human ancestors in the area and may belong to some of the first ever Britons. Until now the oldest human remains to be found in Europe all come from around the far south of the continent, including stone tools found in southern Italy and a tooth found in Spain.

Skull fragments from that are around 780,000 years old hominid – the term used by scientists for early humans –were also found in southern Spain. Previously the oldest evidence of humans in Britain were a set of stone tools dated to 700,000 years ago from near Lowestoft in Suffolk, although more recently stone tools were also discovered at the site in Happisburgh.

Dr Nick Ashton, curator of the department of prehistory of Europe at the British Museum and an archaeologist at University College London, said: “These are the oldest human footprints outside Africa. It is an extremely rare and lucky discovery. 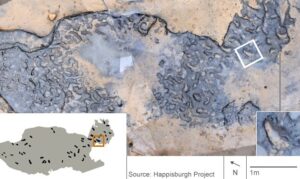 “The slim chance of surviving in the first place, the sea exposing it in the right way and thirdly us finding it at the right time – I’d say it was a million to one find.“Footprints give you a tangible link that stone tools and even human remains cannot replicate. “We were able to build up a picture of what five individuals were doing on one day. “The Happis- burgh site continues to re-write our understanding of the early human occupation of Britain and indeed Europe.”

The discovery was unveiled at the British Museum in London and in the scientific journal PLOS One and will feature in a new exhibition at the Natural History Museum. There are only three other sites in the world that have older footprints, all of which are in Africa – a set is 3.5 million years old in Tanzania and some that are 1.5 million years old in Kenya. The Happisburgh prints were uncovered at low tide after stormy seas removed large amounts of sand from the beach to reveal a series of elongated hollows in the compacted ancient silt.

Scientists removed the remaining sand and sponged off the seawater before taking 3D scans and images of the surface. In some cases, researchers were able to identify heel marks, foot arches, and even toes from the prints. They found prints equivalent to up to a UK shoe size eight. They also estimate that the individuals who left the prints ranged from around two feet 11 inches tall to five feet eight inches tall. At least two or three of the group were thought to be children and one was possibly an adult male.

“It is likely they were somehow related, and if they were not direct family members they will have belonged to the same family group. “The footprints were fairly close together so we think they were walk-ing rather than running. Most were directly alongside the river in a southerly direction but also there were some going in all different directions like they were pottering around.

“If you imagine walking along a beach now with children then they would be running around.”

Unfortunately the prints themselves were quickly eroded away by the sea and have now been lost. Happisburgh is one of the fastest eroding parts of the British coastline. The Environment Agency and local authority decided some years ago to abandon maintenance of the sea defences there as it was no longer considered to be cost effective.

Scientists hope, however, that as further parts of the coastline are eroded more evidence of human activity and perhaps more footprints will be uncovered. From their analysis of the prints, researchers believe the group was probably heading in a southerly direction over what would at the time have been an estuary surrounded by salt marsh and coniferous forest.

At the time Britain was connected to continental Europe by land and the site at Happisburgh would have been on the banks of a wide  estuary several miles from the coast. The estuary itself would have provided a rich array of plants, seaweed and shellfish. Fossils of mammoth, an extinct kind of horse and early forms of voles have also been found at the site Happisburgh.

The early humans could also have hunted or scavenged the grazing herds for meat. The discovery of the footprints is particularly signifi-cant as there are few surviving tracks of human ancestors elsewhere in the world. Scientists can glean large amounts of information about our ancestors, including the size of the groups they travelled in, how they walked, their size and weight.

The prints were discovered in deposits that have also revealed stone tools and fossilized bones dating to between 800,000 and one million years ago. Dr. Simon Lewis, a geoarchaeologist at the Queen Mary University of London, said: “Although we knew the sediments were old, we had to be certain that the hollows were also ancient and hadn’t been created recently.

There are no known erosional processes that create that pattern. In addition, the sediments are too complicated for the hollows to have been made recently.” Early primitive human ancestors first began to appear in Africa around 4.4 million years ago and are thought to have only left the continent around 1.8 million years ago and are not thought to have arrived in Europe until around 1 million years ago. Extinct species such as the Neanderthals appeared first appeared between 400,000 and 600,000 years ago, while modern humans – Homo sapiens – first began to emerge from Africa around 125,000 years ago but did not arrive in Europe until around 40,000 years ago.

It is thought that the footprints may have belonged to a relative of a Homo antecessor – an extinct hominid species that may have been a common ancestor to both modern humans and Neanderthals, although such theories are still highly disputed.

Remains from Homo antecessor were discovered in the Atapuerca Mountains in Spain. Professor Chris Stringer, an eminent anthropolo-gist at the Natural History Museum in London who worked with the team, said: “The humans who made the Happisburgh footprints may well have been related to the people of similar antiquity from Atapuerca in Spain, assigned to the species Homo antecessor.

“These people were of a similar height to ourselves and were fully bipedal. They seem to have become extinct in Europe by 600,000 years ago and were perhaps replaced by the species Homo heidelber-gensis.