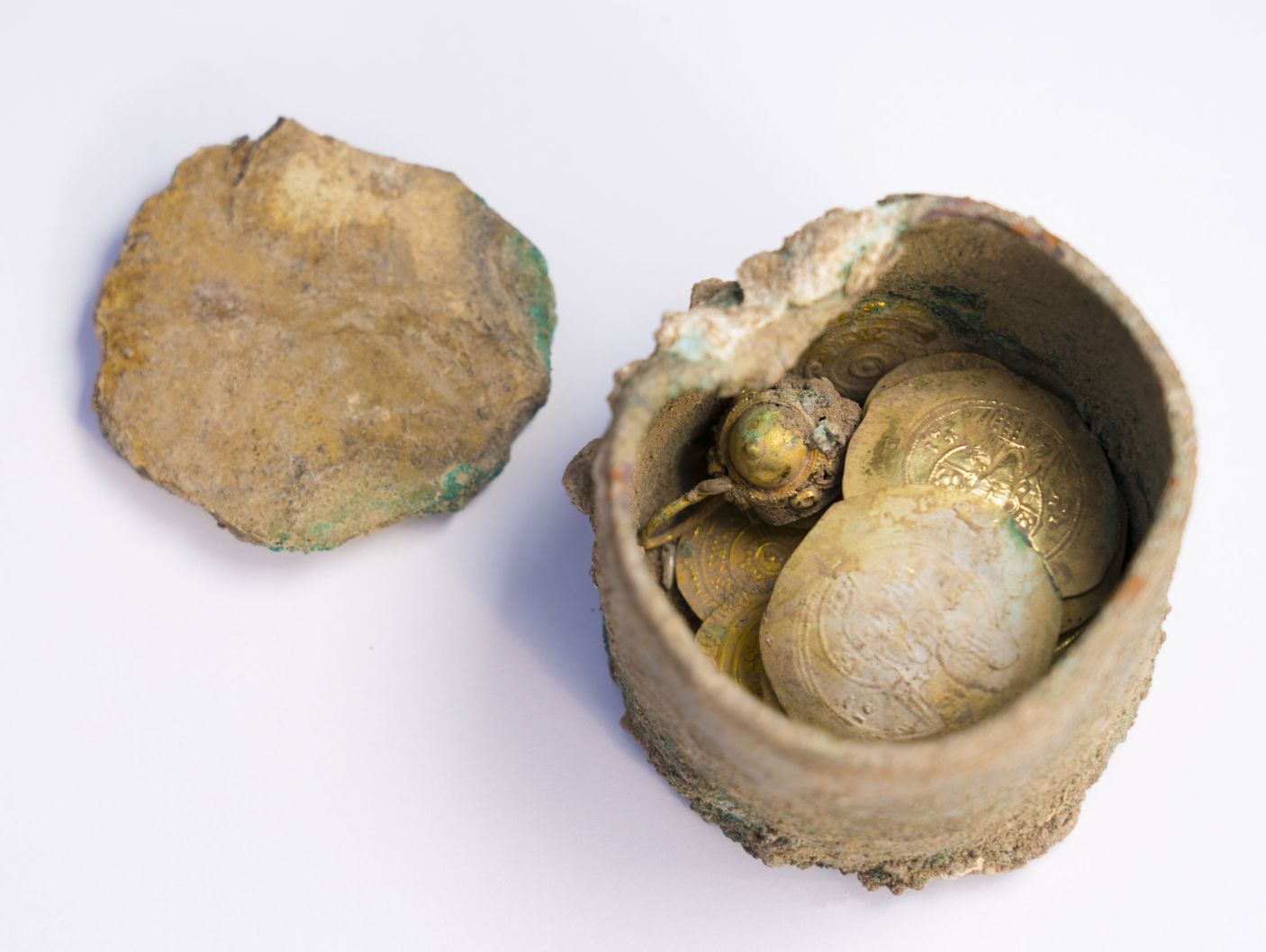 Israeli archaeologists have uncovered a cache of rare coins and a gold earring that were likely hidden away more than 900 years ago, just before the Crusaders vanquished the ancient city of Caesarea and massacred its inhabitants.

The earring and hoard of 24 coins, minted by the Christian Byzantine Empire and the Muslim Fatimid Caliphate, were found hidden between two stones in the side of a well that was part of a house dated to the Islamic time frame, the Israel Antiquities Authority said in a statement Monday.

The Found was made during digging and conservation work that is being conducted in the area.

It was announced during the Hanukkah holiday, which among other traditions includes gifting small amounts of money (“gelt” in Yiddish) or chocolate coins to kids.

But there was nothing festive about the circumstances in which this medieval fortune was separated from its owner.

Based on the dating of the coins, specialists believe the hoard was squirreled away sometime before the Crusaders conquered the city in 1101, said Peter Gendelman and Mohammed Hatar, the IAA archaeologists who direct the dig.

As indicated to contemporary accounts, most of the inhabitants of Caesarea were massacred by the army of Baldwin I, king of the recently created Kingdom of Jerusalem.

“The cache is a silent testimony to one of the most dramatic events in the history of Caesarea – the violent conquest of the city by the Crusaders.

Someone hid their treasure, hoping to retrieve it – but never returned,” the archaeologists said. “It is reasonable to assume that the treasure’s owner and his family perished in the massacre or were sold into slavery, and therefore were not able to recover their gold,” they added.

The cache constituted a small fortune since at the time just 1 or 2 of these coins were equivalent to the annual salary of a simple farmer, said Robert Kool, an IAA coin expert.

“It seems that whoever saved the cache was at least well-to-do or involved in commerce,” he added.

This is confirmed by the unique mix of currencies discovered by the archaeologists: 18 Fatimid dinars, which were the standard local currency at the time and have been found elsewhere in Caesarea, as well as six extremely rare Byzantine coins, including 5 belonging to the reign of Emperor Michael VII Doukas (1071–1079), Kool said.

Since these coins were not known to circulate locally, they point to possible trade links between Caesarea and Constantinople during these time, possibly by the very owner of the treasure, the expert said.

Caesarea was a rich port city built more than 2,000 years prior by King Herod the Great and named after Augustus, who was the Roman emperor (that is, Caesar) at the time.

The town continued to be a vital trading center after the Muslim conquest of the Levant in the 7th century.

It changed hands twice during the Crusades but was ultimately retaken by the Mamelukes, who destroyed the town and left it almost unpopulated in the following centuries.

The recently found gold hoard is not the first treasure found in Caesarea and dated to the Crusader conquest.

A pot filled with gold and silver jewelry was found nearby in the 1960s and a collection of bronze vessels was found in the ’90s, the IAA statement said. Both these fortunes are displayed at the Israel Museum in Jerusalem.

The treasures were located near the port in the Fatimid and Abbasid neighborhood that was built adjacent to a Herodian sanctuary nearly 1,000 years after Herod’s reign.

The latest find was made as part of a massive 150 million shekel ($40.3 million) renovation of Caesarea’s archaeological park, financed by the Edmond de Rothschild Foundation.

“It is symbolic that the gold coins were found on the eve of Hanukkah,” said Michael Karsenti, CEO of the Caesarea Development Corporation, the foundation’s executive arm.

“For us, this is certainly ‘Hanukkah gelt,’ and a testament to how much more is still hidden within Caesarea,” he added.