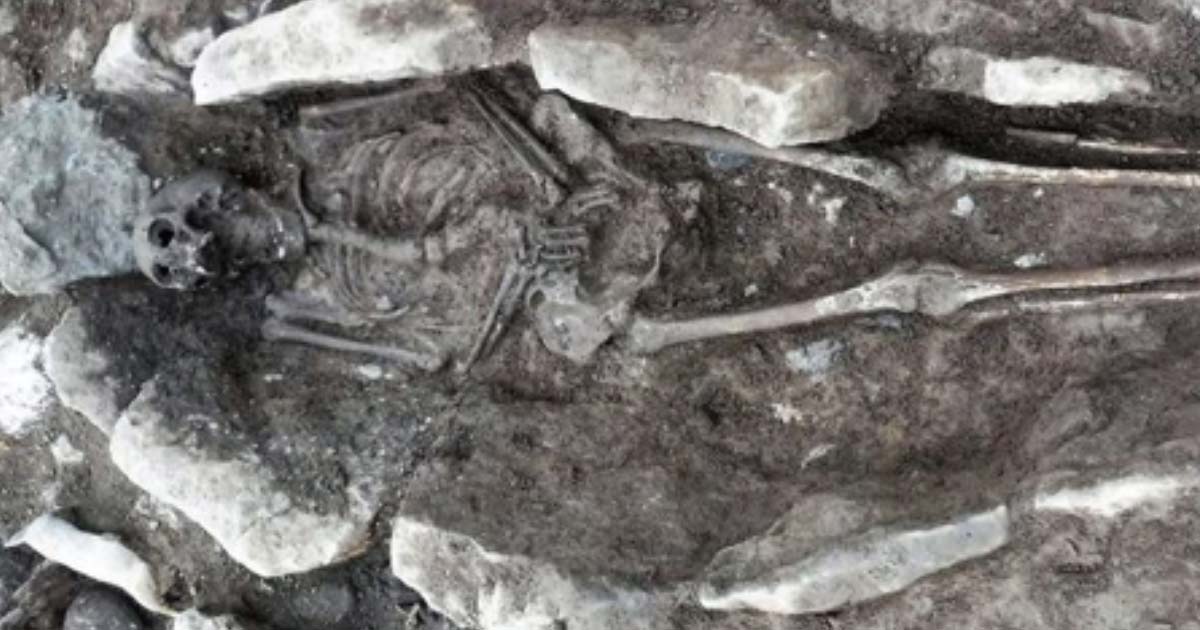 Scores of skeletons and artifacts — some dating back 1,600 years — were found in a long-hidden cemetery on the grounds of a college campus in Wales.

During 2016, construction of a new road to connect a local highway with Coleg Menai’s Pencraig Campus in Anglesey, Wales, revealed the remains of 54 people dating to the early medieval period, from the 4th century to the 8th century, according to Wales Online.

Then, in 2017, an additional 32 individuals were uncovered nearby, prior to the construction of the college’s new engineering center; bones and objects from this location dated from around A.D. 400 to A.D. 700, said Irene Garcia-Rovira, Project Manager at Archaeology Wales.

Researchers are now attempting to explain strange characteristics regarding the people’s age, gender and race. Could these remains be those of slaves brought there by the Vikings?

The skeletons were taken away from the site for further tests and it was determined that the graves dated from approximately 1,600 years ago. The Daily Mail reports that ‘‘They were likely buried in the early medieval period after the Romans left Britain’’.

This is the period known as the Dark Ages when civilization virtually collapsed in Europe. In the British Isles, it was a period of endemic warfare and when the Anglo-Saxon kingdoms of Wessex, Northumberland, and Mercia started to emerge.

Researchers carried out an isotope analysis of the remains in order to identify their origins.

They expected to find that the remains were of local people who had died in the Dark Ages. Instead, they found that the skeletons included those of people who came from across Europe.

“Some individuals came from western Britain, where the border is today between England and Wales, a couple from Scandinavia and a couple from Mediterranean places like Spain,” said Dr. Irene Garcia Rovira of Archaeology Wales.

This was remarkable because, in the aftermath of the collapse of the Roman Empire, long-distance travel was believed to have been virtually impossible because of war and a breakdown in the trade network.

The experts were baffled as to how so many people from so far away came to rest in an island off the North coast of Wales, and why. In the period when the individuals were interred in the cemetery, the island of Anglesey was controlled by the Viking kingdom of Dublin. It appears that many Irish settlers migrated to the island. Dublin at this time was one of the centers of the slave trade in Europe.

Those who were buried in the graves were possibly slaves that had been brought to Anglesey by the Vikings based in Ireland.

However, it appears that Anglesey was only under the control of the Dublin Norse for a few years and why so many people from so far away were buried at the site is still a mystery.

The origin of the dead was not the only peculiarity about the skeletons. The Daily Mail reports that the ‘‘experts were puzzled to find the mass grave included more females than males’’. Why this is the case is unknown.

The majority of the remains came from people who died in their mid-forties. Dr. Rovira stated that ‘‘though young by today’s standards, was relatively long-lived for the time’’ reports the World News Net.

To add to the mystery of the cemetery, not many grave goods were found. A 2nd century AD Celtic brooch was among the few items retrieved. A Roman coin was also uncovered. These items date to a period much earlier than when the dead were buried in the cemetery.

The CEO of the college, Dafydd Evans has pledged to collaborate with the authorities to put any artifacts uncovered on display at the local Oriel Ynys Mon museum.

There is expected to be more work carried out at the site. This may help to solve the mystery of burial grounds and its skeletons, which could potentially radically change our knowledge about the Dark Ages.  However, it seems that the remarkable and peculiar graves will remain a mystery for some time to come.