The Roman pottery fragments discovered in the ’70s have now revealed some fresh clues to their origins and character.

It is now believed that the pottery has a Christian symbol carved on it, which the archeologists had previously overlooked or missed.

The finding is very important as the researchers are particularly interested in the information about the religious make-up of the time when it was first made. The pottery was produced in Hinterland, now known as Brentford, West London region, from the 4th BC.

The Found is hailed by the archaeologists as a ‘tantalizing find’ and is likely to shed some light on the sprouting of Christianity from Londinium (the Roman London) into the other parts of Britain.

Head of Archaeological collections at the Museum of London Roy Stephenson said that finding a Roman relic that shows Christianity’s presence in the outskirts of Londinium in the 4th century is intriguing.

He said that all the previous findings of anything Christian were mostly within the region of London now called Central London.

Brentford being a day’s journey from the ancient Londinium at the time previously thought to have no Christian presence at all, as there was no evidence to make that case. 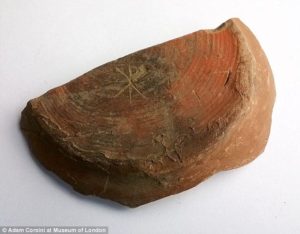 Christian missionaries preferred to stay centralized because the city at the time was a mixture of almost all the major religions and other alternate faiths.

This provided a perfect flourishing environment for the early Christians to learn other faiths, while at the same time spreading the gospel among the travelers and traders.

However, upon close inspection the true nature of its significance revealed itself. They quickly found out that what they discovered is a rare find and that such discovery could change the narrative of Londinium and Christianity in the 4th century.

In the ancient Roman city of Londinium, religions played a very important role in the makeup of society. The inhabitants of the city worshipped many gods and goddesses. Every aspect of their lives was governed by the religion of some kind or the other.

They celebrated religious holidays and took part in festivals. Roman deities like Jupiter, Mars, and Minerva were possibly the most worshiped gods.

Isis and Mithras were also incorporated into the local religious experience. Mithraism at the time was specifically the secret society for the soldiers and knights both local and foreign.

Londinium was in many aspects very similar to modern London, people came to the city from all over the world looking for a trade, and some of them made Londinium their home. Christianity arrived at the ports of Londinium and quickly saw an opportunity in the religiously fertile Londinium.

However, it took Christians a fairly long period of time to step out of Londinium and spread outwards with their message. The recent discovery at least provides some evidence that Christian missionaries had actually moved out of Londinium, at least westwards.

Now it is up to the researchers to further the study towards that ancient route in order to shed more light on the journey of Christianity deep into the other part of Britain.