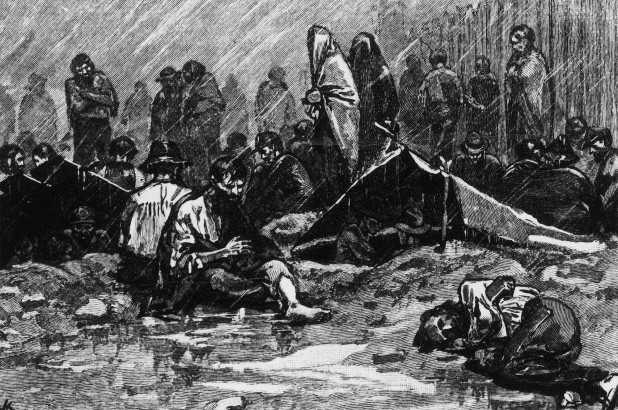 When he walked through the gates of Andersonville prison, Robert H. Kellog was 20 years old.During a bloody battle in Plymouth, North Carolina, he and his comrades were captured.

They discovered that their hardships were far from over in the depths of Georgia: “As we entered the place, a spectacle met our eyes that almost froze our blood with horror … before us, there were forms that were once active and upright — stalwart men, now nothing but walking skeletons, covered with filth and vermin …Many of our men earnestly exclaimed, ‘ Can this be hell?

‘ ‘Harpers Weekly depiction of Andersonville Prison, 1865Hardened veterans, scarcely strangers to the sting of battle, were nevertheless unprepared for the horror and despondency that awaited them in the prison camps of the Civil War.

While they often wrote frankly of the carnage wrought by bullets smashing limbs and grapeshot tearing ragged holes through advancing lines, many soldiers described their prisoner of war experiences as a more heinous undertaking altogether.

Not every experience behind camp walls was the same, however.Some soldiers fared better with their captors in terms of shelter, clothing, rations, and overall treatment.

When prisoner exchanges were suspended in 1864, prison camps grew larger and more numerous.Overcrowding brutalized camp conditions in many ways.  Of the more than 150 prisons established during the war, the following seven examples illustrate the challenges facing the roughly 400,000 men who had been imprisoned by war’s end.

Situated on a 54-acre island within the James River, a stone’s throw away from the Confederate capital of Richmond, Belle Isle received the ire of Northern politicians and poets alike.

Lucius Eugene Chittenden, U.S. Treasurer during the Lincoln Administration,  described the dreadful and horrifying conditions Union soldiers found at Belle Isle:”In a semi-state of nudity…laboring under such diseases as chronic diarrhea, scurvy, frost bites, general debility, caused by starvation, neglect and exposure, many of them had partially lost their reason, forgetting even the date of their capture, and everything connected with their antecedent history.

They resemble, in many respects, patients laboring under cretinism. They were filthy in the extreme, covered in vermin…nearly all were extremely emaciated; so much so that they had to be cared for even like infants.”Belle Isle operated from 1862 to 1865. In that time, the number of men packing onto the tiny island grew to more than 30,000 men.

The poet Walt Whitman was driven to comment on the shocking living arrangements at Belle Isle after encountering surviving prisoners, appalled at “the measureless torments of the…helpless young men, with all their humiliations, hunger, cold, filth, despair, hope utterly given out, and the more and more frequent mental imbecility.”No wooden structures were furnished for the prisoners at Belle Isle.

If they were lucky, several men could be crammed into thin canvas tents, but most were forced to construct their own drafty shelters.  The lack of substantial and adequate shelter compounded the prisoners’ plight on Belle Isle and increased the amount of death and suffering brought on by disease and exposure.

Modern estimates place the total deaths close to 1,000 men, however, period assessments varied greatly.  Despite the controversial number – Confederates claiming only a few hundred and the Union claiming upwards of 15,000 mortalities – the dreadful conditions Federal prisoners faced is unquestionable.

In the 14 months of its existence, 45,000 prisoners were received at Andersonville prison, and of these nearly 13,000 died. Captain Henry Wirz, commandant at Andersonville, was executed as a war criminal for not providing adequate supplies and shelter for the prisoners.However, modern interpretation of the evidence suggests did, in fact, face real supply shortages.There were simply too many prisoners and not enough food, clothing, medicine, or tents to go around. Limited rations, consisting of cornmeal, beef and/or bacon, resulted in extreme Vitamin-C deficiencies which often times led to deadly cases of scurvy.

In addition to the high frequency of scurvy, many prisoners endured intense bouts of dysentery which further weakened their frail bodies.

Prisoners at Andersonville also made matters worse for themselves by relieving themselves where they gathered their drinking water, resulting in widespread outbreaks of disease, and by forming into gangs for the purpose of beating or murdering weaker men for food, supplies, and booty.

One prisoner commenting on the daily death toll and foul conditions proclaimed, “… (I) walk around camp every morning looking for acquaintances, the sick, &c. (I) can see a dozen most any morning laying around dead. A great many are terribly afflicted with diarrhea, and scurvy begins to take hold of some”.The nature of the deaths and the reasons for them are a continuing source of controversy.

While some historians contend that the deaths were chiefly the result of deliberate action/inaction on the part of Captain Wirz, others posit that they were the result of disease promoted by severe overcrowding.

Andersonville was more than eight times over-capacity at its peak.  The shortage of food in the Confederate States and the refusal of Union authorities to reinstate the prisoner exchange are also cited as contributing factors.

Despite the controversy, there can be little doubt that Andersonville was the Civil War’s most infamous and deadly prison camp.

However, the issues raised by Andersonville were shared by many camps on both sides.

Prison camps during the Civil War were potentially more dangerous and more terrifying than the battles themselves.

A soldier who survived his ordeal in a camp often bore deep psychological scars and physical maladies that may or may not have healed in time.56,000 men died in prison camps over the course of the war, accounting for roughly 10% of the war’s total death toll and exceeding American combat losses in World War I, Korea, and Vietnam.