The archaeologists found a “billboard” of hieroglyphs sculptured in the rocks of El-Khawy, Egypt. The symbols that represent a message about the cosmos are the first recorded (large) monumental hieroglyphs dating back about 5,200 years. 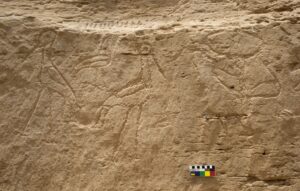 “This found rock art site at El-Khawy contains some of the earliest – and largest – signs in the formative stages of the hieroglyphic script and presents evidence for how the ancient Egyptians invented their unique writing system,” John Darnell, a professor at Yale University who co-directs the expedition that discovered the rock art, said in a statement from Yale University. The Egyptian antiquities ministry also issued a statement on 22 June 2017.

Another sculpture, which depicted a herd of elephants, was found by explorers in 4000 B.C. 3500 B.C. and 3500 B.C. One of the adult elephants in the scene was drawn with a little elephant inside its body – “an incredibly rare way of representing a pregnant female animal,” Darnell said in the Yale statement. 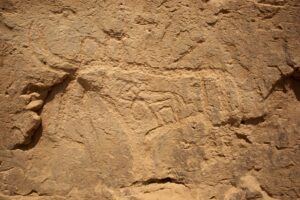 Only a few similar scenes are known from Egypt.  For example, Darnell told Live Science that a vase previously found in the Abydos site portrayed a pregnant hippopotamus.

The four first hieroglyphic signs were sculpted around 3250 B.C. And as the symbols are about 70 cm high and “abright, almost white, in comparison to the underlying brown stone’s patina” after they were recently sculpted, Darnell told Live Science.

“In the modern world, this would be akin to seeing smaller text on your computer screen and then suddenly seeing very large ones made the same way only on a billboard,” Darnell said in the Yale statement.

One of the signs shows a bull’s head on a short pole, a symbol found at other Egyptian sites. “The bull’s head appears to be a symbol of royal power during the formative phases of the Egyptian state,” Darnell told to Live Science.

The other three signs show two storks, back-to-back, with a bald ibis bird in between them. The stork-ibis-stork arrangement suggests that those three signs are making a “statement about the cosmos through the solar cycle,” Darnell told Live Science, noting that similar arrangements of symbols can be seen at other Egyptian sites.

Together, the four symbols were likely “an expression of royal authority over the ordered cosmos,” Darnell said, adding that the “inscription was visible to travelers going to and from the early city of Elkab.”

The hieroglyphs would have been visible to anyone who passed by during this time, suggesting that many ancient Egyptians were able to understand the signs, Darnell said.

The rock carvings were discovered by a joint expedition from Yale and the Royal Museums of Art and History, in Brussels. The expedition team works in collaboration with the Egyptian antiquities ministry.