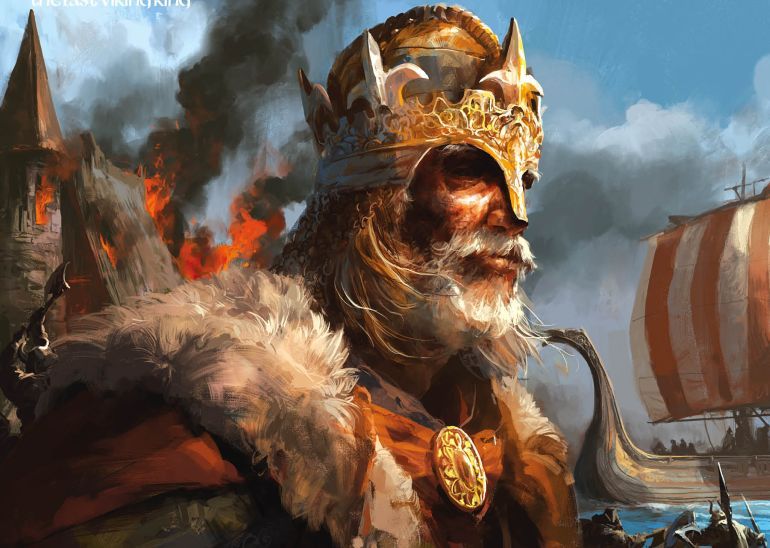 5 Viking Kings (and 1 Princess) who have Become Legends:

Vikings were a tough bunch. Pillaging, conquering and killing earned them a reputation as a force to be feared and avoided. While there were many Viking kings, a few are still remembered as the most important.

Ivar lived in the 9th century, probably gaining his nickname from the osteogenesis imperfecta medical condition that gave his bones the ability to bend more than they should.

This genetic condition weakens the bones and leaves them susceptible to easy breakage, sometimes for no reason. Not to be vanquished, Ivar had his men of the Great Heathen Army carry him into battle on his shield as they invaded Ireland and discovered the settlement of Dublin in 856 AD.

The website ancient-origins.net tells us of another ninth century Viking warrior named Ímar that may have been Ivar the Boneless.

After 870 AD there is no mention of Ivar, but Imar was recorded as dying in 873 AD and was the leader of the Dublin settlement.

Erik the Red’s son was the first white person to land on the North American continent on his way back from Norway after King Olaf I introduced him to Christianity. Leif spent the winter exploring what is now thought to be Newfoundland’s area.

He converted his mother to Christianity and the two built the first Christian church in Greenland, but his father refused to join.

Leif’s brother, Thorvald, tried to settle in North America, but was turned away by the Native Americans, according to history.com. Thorvald is believed to have been killed in a fight with the Natives.

Probably one of the Vikings most famous. Erik Thorvaldsson, born in Norway, earned his nickname from the red hair shock on his head. When his father committed a murder, he and his family were kicked out of Norway.

They settled in Iceland until Erik was expelled for manslaughter about 982 AD. Erik set sail for a large island, and when he arrived, he named it Greenland to make it sound attractive for any settlers that would come.

Erik the Red from Arngrímur Jónsson’s Grönlandia. Note anachronistic details in his weapons and armor.

He explored the island for several years naming potential settlements, many after himself.   In about 985 Erik returned to Iceland looking for people willing to inhabit the island and brought back almost 500  new settlers. The colonies did well until about the mid-15th century when they died out.

While not officially a ruler, the daughter of Erik the Red, Freydis Eiríksdóttir, had accompanied her husband on one of the final voyages to North America.

The pregnant Freydis Grabbed a sword when their camp was threatened by Native Americans and fended them off on their own, earning her a reputation as a fierce female warrior.

Her greed though, like many rulers of the day, got the better of her. She convinced her husband to kill their expedition partners, and she took it upon herself to kill their wives and children to acquire their land.

In 911 AD the Viking leader Rollo was given the area of France now known as Normandy by King Charles the Simple. In return, Rollo converted to Christianity.

Charles feared more Viking invasions and felt that Rollo would be able to fend off any raiding parties.

Gradually, Rollo gained more land and became the 1st ruler of Normandy. It is not known if Rollo was from Denmark or Norway, but scientists in Britain and France have been conducting DNA research on specific burials in Normandy.

Rollo’s descendants became the Normans, and his 3rd great-grandson was William the Conqueror, who according to ancient pages.com, is the ancestor of all European royals.

Possibly the father of Ivar/Imar, Ragnar Lodbrok was nicknamed “Hairy Breeches” because of a suit of armor he designed out of animal hide to fight snakes. When he was 15, he killed an infestation of poisonous snakes and won a princess to marry.

He commonly raided settlements along the rivers in France and was bribed by the French king Charles the Bald not to invade Paris.

Unfortunately, when Ragnar attempted to invade England, he was captured and thrown into a pit full of snakes without his snake armor. He died a slow, horrible death.